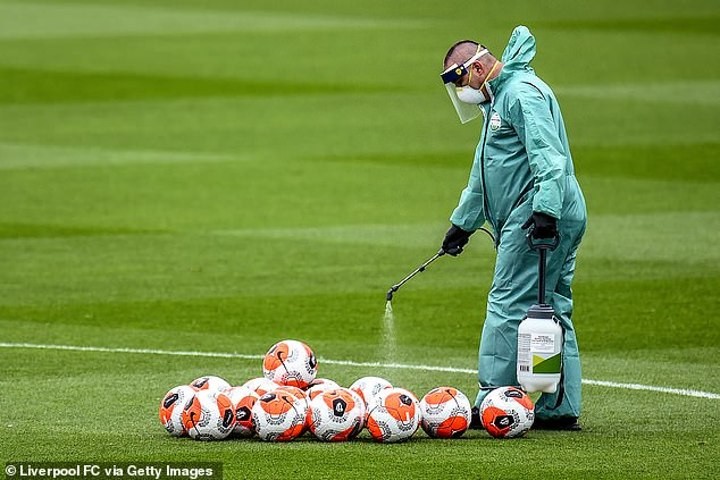 Liverpool and other teams who use pressing tactics have been warned that they face bigger challenges in limiting contact between players during phase two of training.

Detailed guidelines are being provided to all Premier League sides and clubs in the division have been told they must develop training plans that limit the number of close encounters.

Risk assessment must also be carried out on every session that will be held at training.

A key vote on Wednesday is likely to see clubs vote for contact training to resume, but managers and coaches are being told to account for their style of play.

As a result, the Times have reported that they are meant to only have short sessions that involve high-risk contact.

Contact training will be the second of the three steps that England's top flight will take ahead of a return to action – following small group training and preceding a return to games, likely to be on June 19 or 25.

There has not been any football played in England since mid-March due to the coronavirus pandemic.

In order to contain the spread of the virus, each club will have to appoint a 'Covid-19 coaching co-ordinator', according to the report. They will design sessions that assess the contact risk of each activity – with the aim of a low score overall.

Other considerations include the size of the pitch used for the session, the number of players involved and a team's style of play.

Jurgen Klopp's Liverpool are the biggest proponent of gegenpressing, with Manchester City and Chelsea also keen on high-press systems. That is considered to involve more contact than teams who defend in a compact manner.

There will also be a limit on the number of throw-ins during training, while staff who handle equipment should wear PPE (Personal Protective Equipment) gloves.

The report adds that goalkeepers should train separately while drinks breaks will be limited to dissuade mingling, with players providing their own bottles.

Step one currently limits sessions to 75 minutes and five players – those will be removed for step two, although social distancing is still encouraged.