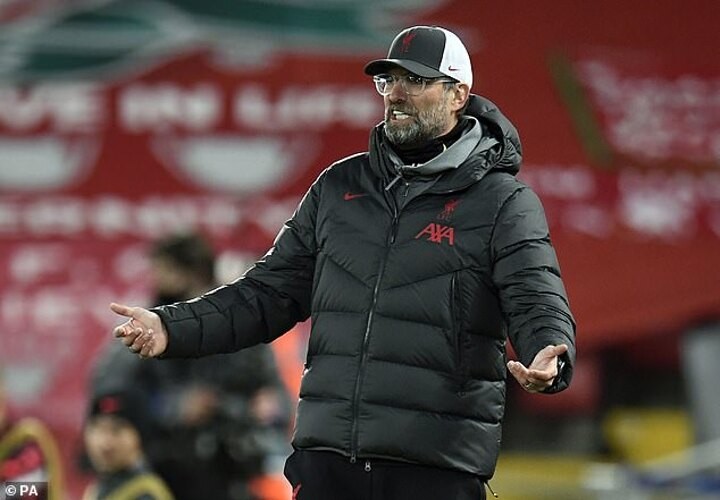 Jurgen Klopp is likely to be furious with the announcement of the Premier League's Christmas TV fixtures which will see his Liverpool side face another hectic schedule.

Klopp has already vented his frustrations at Sky and BT Sport for causing fixture congestion with Liverpool facing a 12.30pm kick-off in Brighton on Saturday, three days after their Champions League defeat by Atalanta. Liverpool had also played Leicester at 7.15pm last Sunday.

The latest set of TV fixtures are not likely to please the Reds' manager either, with his side facing a similar short turnaround at the start of December.

Liverpool's home game with Wolves has been picked for coverage by Sky, meaning they will now play on Sunday, December 6 at 7.15pm.

The Reds then travel to Norway to face FC Midtjylland on Wednesday, December 9 with an early kick-off time of 5.55pm.

Klopp's side will be back in action with a 4.30pm kick-off at Fulham on Sunday, December 13 and then face a quick turnaround for a top-of-the-table clash with Tottenham at Anfield on Wednesday, December 16 - which will kick-off at 8pm.

After that big game, it will be a trip to Selhurst Park for a 12.30pm kick-off against Crystal Palace on Saturday, December 19.

That means Liverpool will play five games in 14 days, with just two of the fixtures at Anfield.

The schedule is likely to leave Klopp seething given his recent comments about his side's fixture pile-up.

Following Liverpool's defeat by Atalanta, Klopp said it was a 'crime' that his side were being forced to play Brighton at 12.30pm on Saturday.

He said: 'I'm afraid to say but I think it (running out of steam) could happen not only to us but to other teams as well.

'You (BT Sport) my special friends ask us to go on Saturday at 12.30pm, which is nearly a crime to be honest. It has nothing to do with the game tonight but congratulations for that.'

This followed his criticism of Sky after Liverpool's victory over Leicester on Sunday.

In his post-match interview with Sky Sports' Geoff Shreeves, Klopp accused the broadcasters of not caring about player welfare and urged them to find a solution to the tight schedule.

Klopp said: 'It was never about us when I spoke about it. It's about all the players, England players, players who play next summer in the European Championships.

'But if you (Sky) don't start talking to BT then we're all done. Sky and BT have to talk because if we keep playing on Wednesday and then Saturday (at) 12:30, I'm not sure if we will finish the season with 11 players - all the top seven.

'But I know you (the broadcasters) don't care and that's the problem.'

Liverpool have suffered a number of injuries this season and Klopp is one of the managers advocating the reintroduction of five substitutes, which has been implemented in the lower divisions of English football and the top flights of other European leagues.

However, Tottenham boss Jose Mourinho told Klopp there is no solution other than to adapt to the demands of the Premier League.