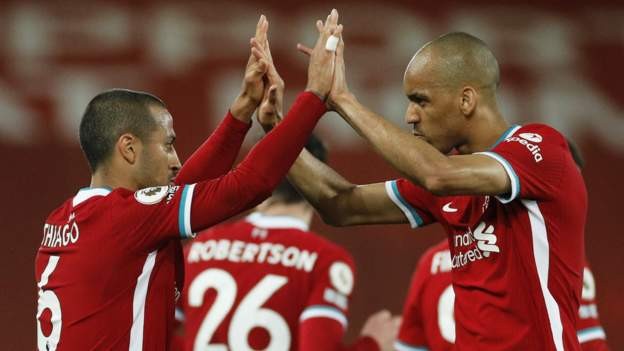 Newcastle United beat the Foxes 4-2 on Friday and Jurgen Klopp's men took full advantage by moving within six points of the top four with four games remaining - while Leicester have three.

Alisson gifted Southampton a chance to equalise late in the game when he passed straight to Che Adams, but the Brazil goalkeeper made amends by saving the Scotland striker's shot.

Spain midfielder Thiago Alcantara then scored his first Liverpool goal in stoppage time to hand Klopp his 100th win at Anfield in all competitions.

Southampton are still not safe from relegation but their Premier League status could be secured when West Bromwich Albion and Fulham play later this weekend.

A return to form at Anfield

After being imperious at home in the past three seasons, Liverpool's title defence faltered mainly as a result of losing six top-flight games at Anfield for the first time in 67 years.

But despite being on a run of just one win from their last 10 league games at home, they made a bright start against Southampton with Salah twice testing Fraser Forster early on and Diogo Jota firing straight at the former England goalkeeper.

Liverpool's stand-in captain Georginio Wijnaldum also headed against the top of the crossbar from a corner, while a Saints break resulted in Alisson having to make a point-blank save from Adams with Nathan Redmond firing straight at him from the rebound.

Just 40 seconds later, Mane rose above Kyle Walker-Peters to head home Salah's inswinging cross. Remarkably, it was the first time the forwards have combined for a goal in the Premier League this season.

Nathan Tella headed straight at Alisson just before the break, and after Adams spurned his opportunity late on, substitute Roberto Firmino fed Thiago to seal victory with a 20-yard strike into the bottom corner.

Offside, Liverpool. Alisson tries a through ball, but Curtis Jones is caught offside.

Attempt missed. Diogo Jota (Liverpool) right footed shot from the centre of the box misses to the right. Assisted by Mohamed Salah.

Attempt saved. Che Adams (Southampton) right footed shot from outside the box is saved in the bottom right corner.

Attempt saved. Ibrahima Diallo (Southampton) left footed shot from the centre of the box is saved in the top centre of the goal. Assisted by Michael Obafemi with a headed pass.

Attempt saved. James Ward-Prowse (Southampton) right footed shot from outside the box is saved in the bottom right corner.