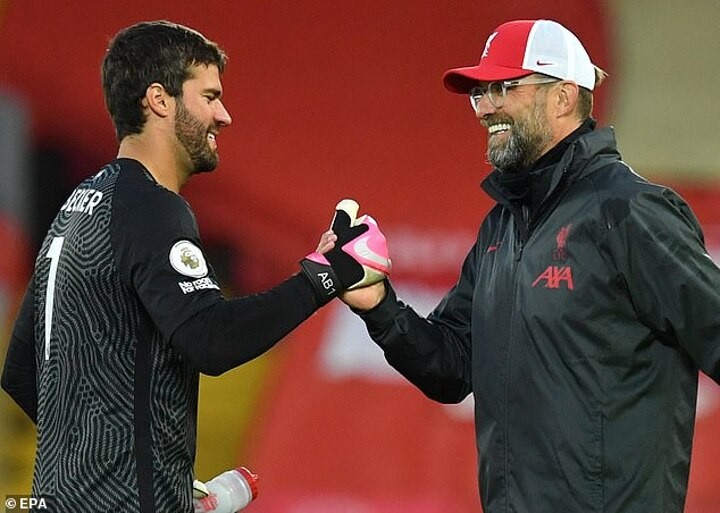 Alisson Becker is ahead of schedule in his bid to overcome a shoulder problem and is nearing a return to action.

Liverpool's influential goalkeeper was initially ruled out for up to as much as six weeks when he damaged his shoulder ahead of the 7-2 defeat at Aston Villa on October 4 but the Brazilian has responded well to treatment.

Though it is touch-and-go as to whether he will be able to face Sheffield United on Saturday evening, Alisson is likely to be in action soon and that will come as huge boost for Jurgen Klopp, whose side have a demanding sequence of fixtures on the horizon.

Klopp is conscious of the physical load that is being put on all Premier League players this season, given the hectic nature of the campaign, and he believes medical and physiotherapy staff will be just as important as players in the weeks and months ahead.

'We always have these problems around the Christmas period when nobody is interested in listening to us when we play on Boxing Day and then two days later,' said Klopp. 'It's a challenge and we deal with it as human beings. We ask a lot but we cannot perform miracles, it is just not possible.

'So they have to play again and nobody cares about the last time they played. That is the situation and the medical department and the coaches are very often in conversations about that and it is difficult to judge.

'Most of the time, I would say, we are right and we find the right solutions. Sometimes we have no idea what will happen and we pray for the perfect outcome.'