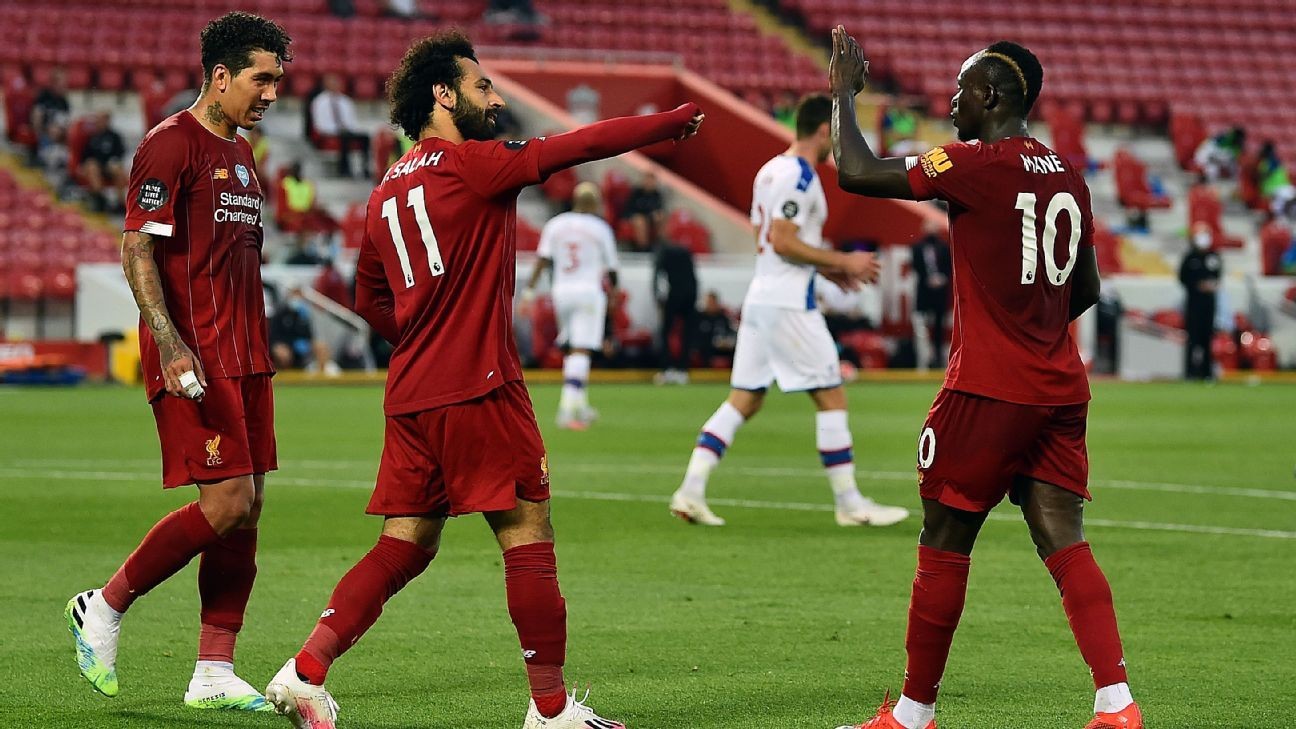 Liverpool have ended their 30-year wait for a top-flight title after being crowned Premier League champions following Manchester City's 2-1 loss at Chelsea on Thursday.

Jurgen Klopp's side defeated Crystal Palace 4-0 on Wednesday evening to leave them needing just two points from their remaining seven games to win the title. But with second-placed Manchester City now 23 points behind with seven matches remaining after Thursday's result at Stamford Bridge, Liverpool have an unassailable lead at the top of the standings.

The triumph brings to an end a 30-year drought as Klopp's class of 2020 ended their wait for a top-flight title which stretched back to 1990 when Kenny Dalglish's side won the old Football League championship. This season's feat means Liverpool now have 19 titles to their name, one behind Manchester United who sit on 20.

Liverpool broke all sorts of records during a memorable campaign. They put together a record-equalling run of 18 consecutive wins from October through to Feb. 29 and have won every league match at home this season, making it a record 23 on the bounce. They also set a club record number of 44 matches without defeat, stretching back to last season.

But when football was postponed due to the coronavirus, there were times Klopp feared his Liverpool side would be denied the chance to win the title on the pitch. When the league was suspended in March, Liverpool were 25 points clear at the top.

Discussions followed on how best to restart the league. Klopp admitted before their match against Everton last Sunday he was worried the league would be decided by points per game or even voided. But to Klopp's relief, the league restarted on June 17 and since then Liverpool have drawn with Merseyside rivals Everton 0-0 and swiped aside Palace to get over the finishing line.

Klopp joins Bob Paisley, Kenny Dalglish and Bill Shankly in Liverpool's pantheon of managerial greats in winning a league title with Jordan Henderson, who spearheaded the Players Together Initiative during lockdown to raise essential funds for the NHS, now a Premier League-winning captain.

Manchester City did their best to pin back Liverpool's lead throughout the season, but there was no stopping Klopp's runaway side. They have led the standings since the second week of the season, and only suffered their first Premier League defeat in February, when they fell to a surprise 3-0 loss against Watford.

A slightly dodgy spell of form followed as Liverpool were knocked out of the FA Cup and the Champions League, but the season hiatus allowed star goalkeeper Alisson to return to full fitness and prompted Liverpool to shift back into familiar winning ways.

Klopp said midweek it was "unthinkable" that any team would be 20 points ahead of Manchester City -- meaning his team must have "must've done a couple of things really well and right" -- but the result at Stamford Bridge on Thursday will spark joy throughout Liverpool. In the 30-year drought Liverpool won the 2005 and 2019 Champions Leagues and three FA Cups, but the league triumph sees them return to the summit of English football.

It has been a fantastic campaign with Mohamed Salah and Sadio Mane chipping in with 17 and 15 league goals respectively. The full-backs Trent Alexander-Arnold and Andrew Robertson have 20 assists between them while that lethal front three of Salah, Mane and Roberto Firmino chipped in with a further 21 assists. Alisson has the most clean sheets in the Premier League this term with 12 while Klopp has won five of the seven Manager of the Month awards.

It has been a tale of domination, but they will have to wait to celebrate it with their fans with the Premier League season being played out behind closed doors.