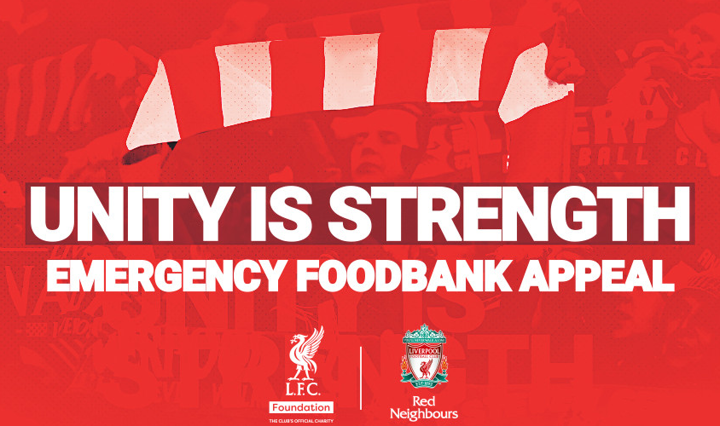 Liverpool Football Club launched an emergency foodbank appeal today to help support the most vulnerable people in Liverpool and Merseyside.

The charitable arms of the club, the LFC Foundation and Red Neighbours, are working alongside Liverpool City Council and the Mayor’s office to support the city’s coordinated response to supporting people in need during the coronavirus outbreak.

Fans can donate to the LFC Emergency Foodbank Appeal via LFC’s and the LFC Foundation’s official Facebook pages. The appeal, which will be administered by the LFC Foundation, will donate 100 per cent of the funds raised directly to the Trussell Trust, which supports a network of foodbanks in Liverpool and Merseyside.

Matt Parish, director of the LFC Foundation, said: “It’s important during these difficult times that we continue to help the people who need our support the most.

“It’s a priority for the club, the LFC Foundation, Red Neighbours and our fans, who have consistently showed their support of Fans Supporting Foodbanks on matchdays in recent years. We would encourage anyone who is able to make a donation to do so as it will make a big difference to the Trussell Trust’s foodbank networks in Liverpool and Merseyside.”

Text donations can also be made directly to the North Liverpool Foodbank by simply texting FOODBANKFC to 70460. Donations will cost £5, plus your standard network message rate.

Alternatively, you can donate any whole amount up to £20 by texting FOODBANKFC, plus the value. For example, FOODBANKFC10 means you’ll be donating £10, FOODBANKFC15 will be £15, and so on. To make an online donation to the North Liverpool Foodbank, please click here.