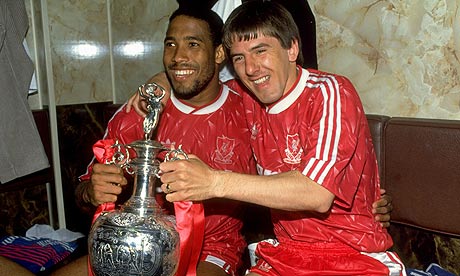 Liverpool legend John Barnes will be installed as a chief in the Brong Ahafo Region of Ghana when he arrives in the country this week.

The former England international has been invited to the country by King of Dormaa Osagyefo Oseadeyo Agyemang Badu II.

The 47-year-oldâ€™s will embark on the charity tour to inspire children to take up to football instead of social vices.

At the of the tour Osagyefo Oseadeyo Agyemang Badu II will install Barnes as a chief in Dormaa at a traditional ceremony marked to honour him for his services to the less privileged in Africa.

Barnes will be a special guest in the Ghana FA Cup final match between Kotoko and Nania FC which will be played in Accra on 24 July.

He will be in Ghana from 23 July to 1st August in different parts of the country.

The 47-year-old will hold coaching clinics for children from various backgrounds in the country to help them improve their game.

Barnes, who was a key player for Liverpool when they dominated the English football in the 1980s, will also help raise funds for ex-footballers who are finding it difficult to make ends me.

A close friend of Barnes, Lawrence Opare Otoo, who is making Barnesâ€™ arrangements to arrive in the country, says the former Liverpool star the delighted with the visit.

The leader of Dormaa, who is an ardent football supporter, is also the owner of Aduana Stars, the team that won the Ghanaian Premier League in their first season in the top-flight last year.

Osagyefo Oseadeyo Agyemang Badu II is keen on using football to encourage the youth in his locality to do positive things.

Barnes retired from football in 1999 before dipping his toes into the shark-infested waters of football coaching and has now retreated to the relative safety of media punditry.