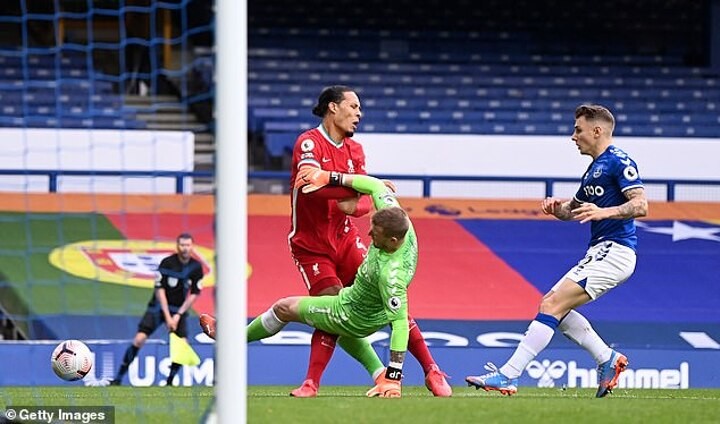 Liverpool legends are split over the horror challenge on Virgil van Dijk from Jordan Pickford that has left the defender facing the prospect of missing the rest of the season.

The Dutch international was taken to hospital for scans after the sickening collision saw him hobble out of Saturday's Merseyside derby after just six minutes.

The club have now revealed that Van Dijk will need to undergo surgery for damaged knee ligaments in a bombshell blow to their title defence.

Graeme Souness sensationally labelled the crunching tackle as an 'assault' while on pundity duty, although colleague Jamie Carragher admitted surprise sympathy for the under-fire Pickford.

The Everton goalkeeper was not cautioned for the incident and Van Dijk was discovered to have been offside at the time.

Michael Oliver, the referee, and VAR official David Coote did not choose to look at the collision as a dangerous challenge - although retrospective action may still be taken.

A clearly-angered Souness, however, has lambasted the failure to show Pickford a red card and strongly condemned the unsightly coming together.

He told Sky Sports: 'Any professional or semi-professional who has played the game, maybe the guys on Hackney Marshes, when they look at that, their focus isn't on the offside, it's on the player. It's outrageous. For me, it's: wow.

'These people who make these decisions who look at that and talk about offside, I just don't get it. I've been to Stockley Park, it's nigh on impossible to make a mistake. And they still get it wrong. That was an assault, not a tackle an assault.'

Liverpool have demanded a review into the application of VAR after the encounter at Goodison Park was marred, and bookended, by two controversial decisions.

But Carragher, who represented the Anfield outfit for his whole career, has opted to partly defend Pickford and pointed out similar unsavoury injuries from his time on the field.

'There'll be a lot of frustrations from Liverpool wanting Pickford to be banned,' he said. 'I am going to defend Pickford on that. I've had my leg broken, I nearly broke Nani's leg. These things happen unfortunately in football.

'I don't believe anyone goes out to deliberately hurt someone. Jordan Pickford is all over the place with his game at the moment.

'He comes out and makes a crazy decision like he's being doing the last 12 months and very unfortunately he's left one of the top players in the Premier League in a bad way.

'I really believe Pickford will not be in a good place himself tonight and I hope he isn't in some ways.'

A statement from Liverpool on Sunday revealed that 'no specific timescale' has been placed for Van Dijk's return to action - although the severity of the setback may rule him out for the rest of the campaign.

The stalwart has not missed a single minute of top-flight action for Liverpool since September 2019.