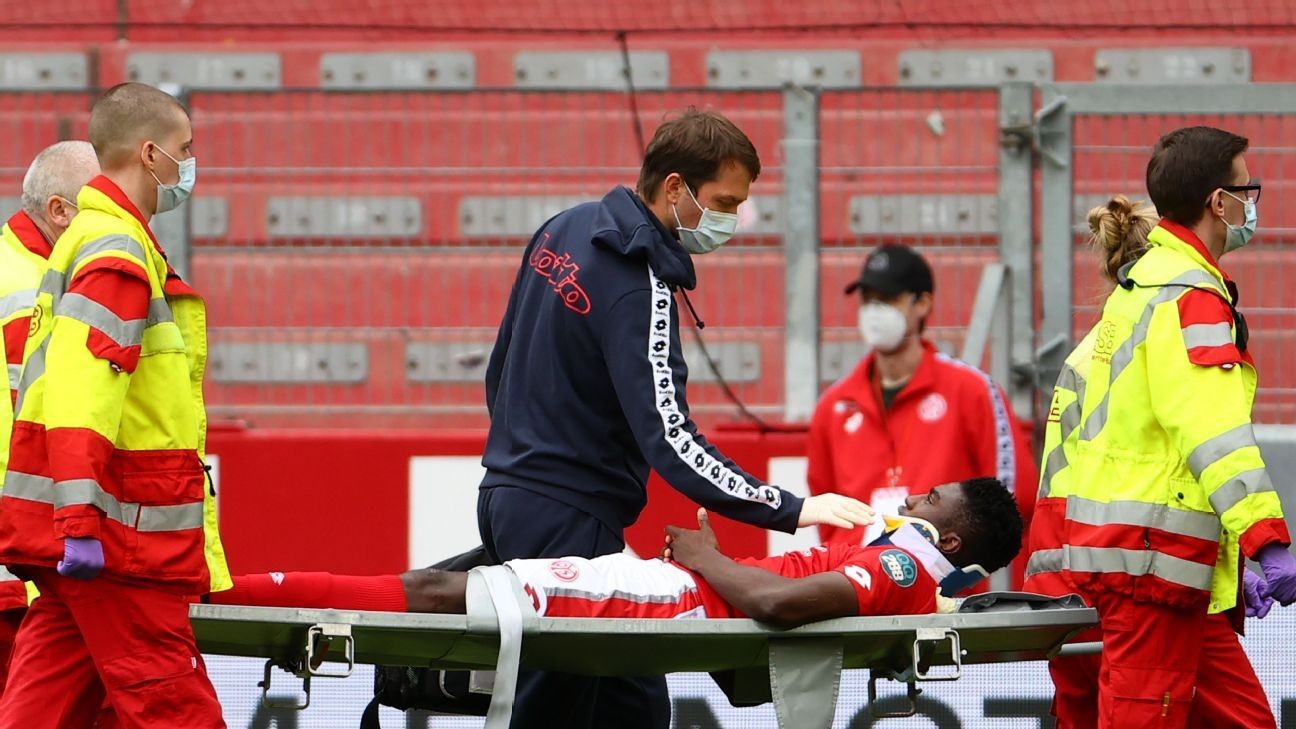 Liverpool loanee Taiwo Awoniyi says he is grateful to be alive after a clash of heads caused him to black out and left him with a concussion during Mainz's Bundesliga home game against FC Augsburg earlier this month.

The Nigerian, who has been on loan with Mainz since last August, clashed heads with Augsburg defender Felix Udoakhai 17 minutes into the encounter and lost consciousness before hitting the ground.

- Insider Notebook: Bale, Zidane at breaking point
- Marcotti's Musings: Liverpool should relax after title win
- What did you miss? The latest from Europe's top leagues

In his first interview since the incident, the 22-year-old told ESPN that luck played a huge part in saving his life, according to his doctors.

"The doctor told me it's really strange," Awoniyi said. "They said the way I was coming down, I should [have gone] down with my head. If I had gone down directly with my head, it would have been a different story.

"They said they were surprised because I was already [passed] out in the air but I was lucky that the first thing that happened was my feet hitting the ground, then my shoulder also, before my head.

"They said that made it less of a problem because if I had landed straight with my head it would have been a different story."

Awoniyi said the period between going up for the ball and waking up in hospital was a black hole, despite apparently insisting he was fine, thus demonstrating the need for strict head injury protocols.

He added: "The doctor told me I was talking on the pitch but I didn't know I was talking. He said when they tried to wake me up I was telling them I'm okay and I still wanted to play.

"But I didn't know I was saying that. I don't remember that.

"When we got to the hospital before I regained consciousness, they were lifting me up and that was when I realized I wasn't on the pitch anymore."

Mainz's Taiwo Awoniyi doesn't remember being stretchered off the field after a clash of heads against an Augsburg defender on 14 June. It ended his Bundesliga season, and his loan stay with the club. Allsport

Dr Babatunde Akinbinu, a member of the Nigeria Football Federation's Sports Medical Committee, agrees with the luck of the fall, telling ESPN that head injuries can be fatal.

Dr Akinbinu said: "He suffered a concussion and, yes, he could have been in danger of death because a head injury may be more than a concussion. You can't say until you attend to the patient.

"Since a concussion is from often trauma to the head/whole body causing often transient brain injury, or cerebrovascular accident if you prefer, it can lead to hallucinatory changes in the person affected."

"The referee ensured that. He did the best possible thing -- especially as the paramedics and team medical unit were only seconds away."

Akinbinu said those few seconds could have saved Awoniyi's life, and the player himself was appreciative enough to call the referee after.

"Most of the players were not even aware of what happened and he was the one that was [aware] and came to my rescue," Awoniyi said.

"For me there are a lot of things that I see that gets me amazed but when I saw that picture it really got to me and I was like, 'Is this me?'

"Honestly, I must commend the referee. I had to send him a text and call him because when I saw the picture of what he did, it was like a saving hand indeed.

"He said he was also glad that I am alive and well and he is looking forward to see me next season if I am still there."

Back home, Awoniyi's family were in quite the state, understandably: "For my wife, it was something I can't explain. My agent kept calling her because she was alone in the house watching the game.

"My family, my mum and my dad were crying and I had to call them immediately I regained consciousness to tell them that everything is fine before they believed I was fine.

"It was a really scary experience. My dad tried to be strong. He said he was praying that everything would be fine, but when my brother started crying he couldn't hold it anymore so he started crying also. And then my mum joined in."

Taiwo Awoniyi has been on Liverpool's books since 2015 but has always been out on loan, and will hope that Jurgen Klopp sees fit to give him his first cap next season. Nick Taylor/Liverpool FC/Liverpool FC via Getty Images

Thankfully, the situation was not as serious as initially thought and Awoniyi was only kept overnight before being discharged. Out of an abundance of caution, he was kept off the field for Mainz's final two games of the season.

The player added: "The doctors told me I could play after seven days. They also said it depends on me but the team advised that I relax a bit because we're safe from relegation.

"They asked me if I want to play but they said the doctor asked that I don't play for a while because this is a fresh experience. That was the medical advice given but I was told I could play if I want to."

Naturally, the goodwill messages were not short in coming. Mainz dedicated their next win to him and even Augsburg and their Nigerian-born defender Udoakhai chimed in.

"He sent me a message to get well soon and also the entire team sent me an apology and wished me quick recovery," Awoniyi said.

"He told me also that we're like family and it's just unfortunate. He said he hopes I'm fine and well, and told me he is also a Nigerian like me -- and I told him I was aware and that we are okay."

Awoniyi was to receive further cheering news with his parent club, Liverpool, claiming their first title in 30 years.

"They just prove they are the best family," he said. "What a club!"

With his loan over, the forward intends to go back to Anfield to resolve his future, with a view to earning his first cap with the Premier League champs: "The season is over now. I will have a meeting with my parent club along with my agent and will see what happens regarding next season."