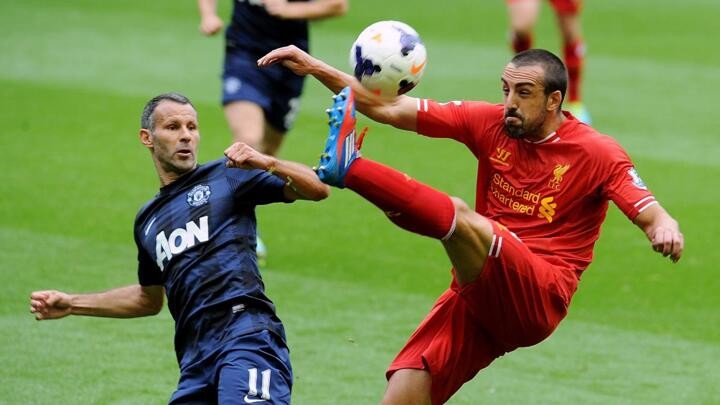 Manchester United are top of the table and providing a serious threat to Liverpool's crown, which José Enrique sees as a positive.

Former Liverpool left-back José Enrique is pleased to see Manchester United back as Premier League title contenders – as long as the reigning champions can defend their crown.

United-Liverpool rivalry at the top

The Reds trail United by three points at the top of the table heading into Sunday's crunch clash on Merseyside.

United are winless in four league games against Liverpool, losing on their last two trips to Anfield, but this will be their first meeting with the Old Trafford outfit leading the league since 2013, when Alex Ferguson oversaw their most recent title triumph.

Liverpool have since won the title once and finished as runners-up twice, while United have only once made the top two.

However, ex-defender José Enrique, who played for the Reds between 2011 and 2016, believes it is healthy for the rivalry for the teams to be competitive at the summit.

"For me, if I have to be honest with you, I like to see United struggle, obviously, but I also like to see them be there if Liverpool are winning the title," he told Stats Perform News.

"Obviously, Manchester City go and buy, then Everton now. Yes, okay, it's good and it's amazing, but Manchester United and Liverpool have always been there, so it's nice to see that battle again.

"When Sir Alex Ferguson was there, Liverpool were struggling a bit, so both of them are going through a good moment now, and it's nice to see this type of thing.

"It's true that a derby's a derby. It doesn't matter in which position you are in the table, because every player is looking forward to this, so you will see the performance and the tackles and everything [that] is different to other games.

"But it's nice to see as well that fire. And finally, Liverpool finishing and winning the league, obviously."

Liverpool are winless in three in the league, but José Enrique added: "Obviously, Liverpool are struggling a bit with results now but both of them are in the top of the table.

"So, it's better to see a game of that magnitude to play for the top spot in the Premier League."

Ole Gunnar Solskjaer is aiming to avoid becoming just the third United manager to fail to win any of his first four league games against Liverpool and the rivalry will then be renewed once more in the FA Cup at Old Trafford six days later.

There will be no supporters at either match due to the coronavirus pandemic, but José Enrique still ranks this ahead of any other fixture.

"It's the best game to be involved in," he said. "Obviously, it's going to be different because there's no fans.

"But it's still a derby and the players will perform really well; it will be a determined game.

"When we play at Anfield, this type of game, the atmosphere is completely different. Even the Champions League is special, amazing, but when you play against United, it's something else, a different experience."