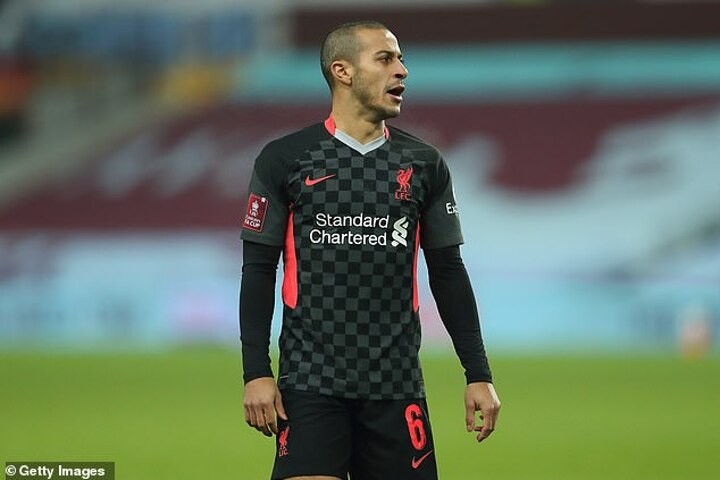 Liverpool manager Jurgen Klopp admits he has tried to lessen the expectation on Thiago Alcantara by suggesting he is like a new signing for January but the midfielder could have a crucial part to play this weekend.

The Spain international's appearance in last week's FA Cup win over a weakened Aston Villa side was only his fifth since his arrival in September after being sidelined first by Covid-19 and then a knee injury.

Thiago has played just 242 Premier League minutes - the least of all the club's outfield players - but in that short time has displayed the sort of quality in terms of passing ability and ball retention which may be vital against their arch-rivals.

Klopp accepts it is difficult to shield a player who won the Champions League with Bayern Munich in the summer from expectation any more.

'To put the pressure a little bit off the situation I said we should sign Thiago in the window but we did now and now he is here let's hope he stays like this for a long, long, long, long time,' he said.

'The most important thing is he fit and he trained. He had 90 and 45 minutes in the last two games.

'We will see if he can play and which position he can play because there are different options.

'But it is really good to have him around now. He is a really good guy and an exceptional football player. It is like a new signing.'

Klopp's side have had a bit of wobble recently and failing to win in their last three league matches allowed United to overtake them at the top of the table heading into the weekend.

But the Reds boss has had more than a week to prepare for the game and is confident they have put their recent woes behind them.

'We lost against Southampton a week or so ago, which was absolutely not what we wanted, but the next day we spoke and the boys had their say as well, all that kind of stuff,' he added.

'Now, we have to put in place on the pitch. That is the situation. I'm really looking forward to this game, to be honest.

'I know Ole (Gunnar Solksjaer, the United manager) said that this is the best moment to play against Liverpool. Yeah? Let's see.'

Klopp, however, insists there is no extra motivation for beating United despite his side now trailing by three points.

'Winning a football game, winning against United is enough in itself,' he said.

'It is not necessary that there are special add-ons. We play at home against United and we want to win.

'They are in the situation they are, they got the points, they deserved the points, we have got ours and the season still has a long way to go so it is not like we talk about if we win we go ahead of them.

'Man City are one game behind and are very close as well so we don't constantly think about other teams.

'We just try to win our football games and for this we have to perform at our highest level because United are good - they always were.'