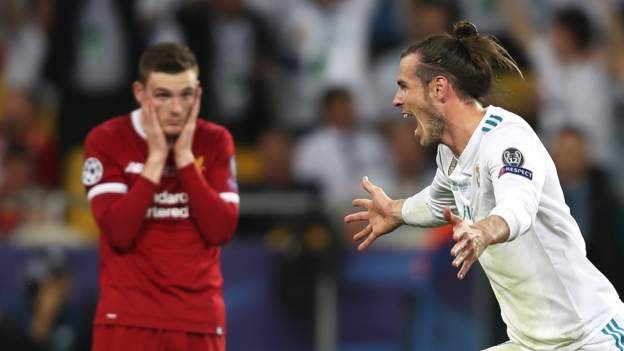 Liverpool's Champions League final against Real Madrid is not about revenge for the Spanish side's victory in 2018, says manager Jurgen Klopp.

Saturday's Paris showpiece is a repeat of the final four years ago in Kyiv, which Madrid won 3-1.

Forward Mohamed Salah, who went off injured in that match after a tussle with Sergio Ramos, has said Liverpool have a "score to settle".

"This was a harsh night for us - it was tough to take," said Klopp.

"But I don't believe in revenge or think revenge is a fantastic idea," he added.

"I understand what Mo said - he wants to put it right. But in Germany we say you always meet twice in life.

"If we get the chance to win it this time it will be a great story, but it will not be because of what happened in 2018."

I'll be at Liverpool next season for sure - Salah

Salah's comments came after Real Madrid dramatically beat Manchester City in the semi-finals. On Wednesday he said he was "motivated through the roof after what happened last time".

The Spanish champions won in 2018 thanks to goals from Karim Benzema and two by Gareth Bale, including a spectacular overhead kick.

Salah left the field in tears after injuring his shoulder in the 30th minute having been pulled down by centre-back Ramos, who has since joined Paris St-Germain.

A year later Liverpool beat Tottenham in the final in Madrid to win the European crown.

The Spain midfielder was substituted at half-time of the Reds' 3-1 win over Wolves in their final Premier League game on Sunday with an Achilles injury.

"He will train this afternoon," Klopp said.

"At the moment it looks like he can be part of training tomorrow. That would be really helpful.

"It's surprisingly good. After the game I was not really positive about it, but we got news that night that it doesn't look that bad. We will see."