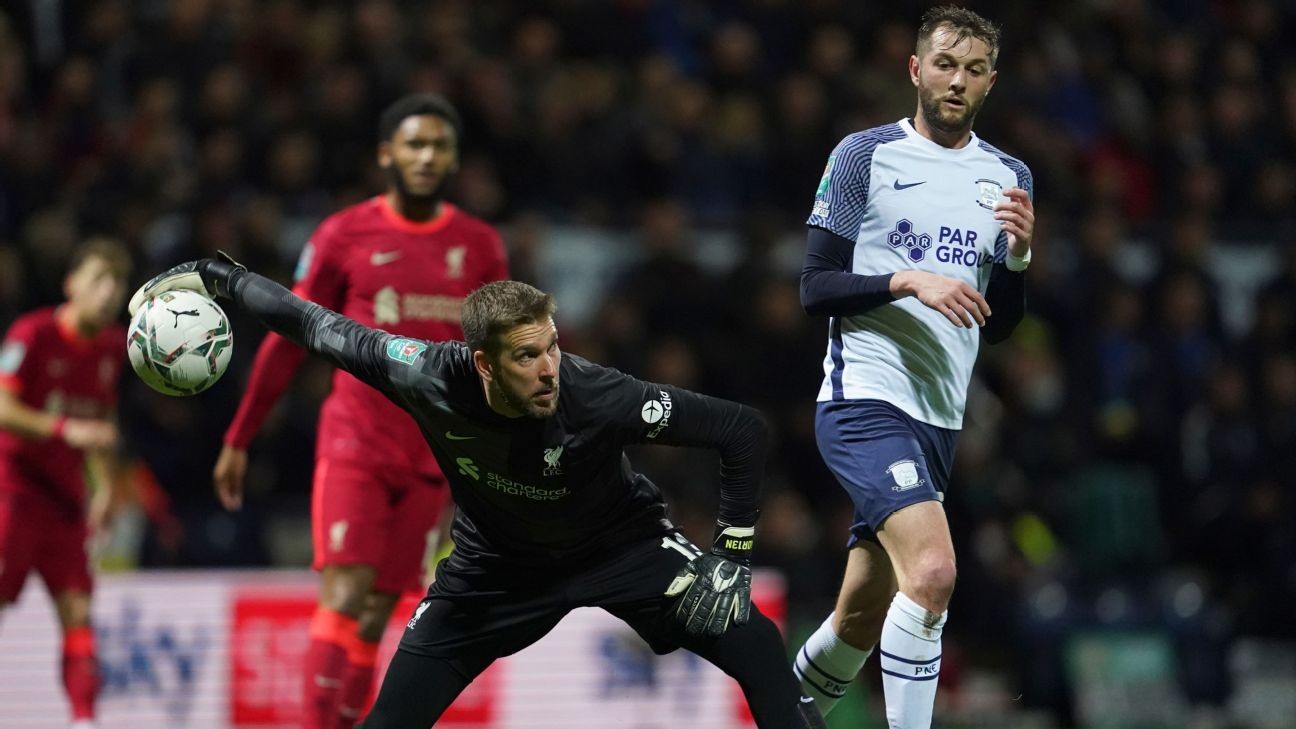 Liverpool edged past Preston North End with a 2-0 victory at Deepdale to advance to the Carabao Cup quarterfinals.

Jurgen Klopp's side were caught napping during the first half which saw the Championship side enjoy some moments of promise. First, the run of Brad Potts eased past Liverpool's high line but his finish was straight at the goalkeeper. And it wasn't long before Adrian was called into the action again, this time palming away into a rebound that was diverted off of the line by the head of Neco Williams.

The home side's finishing in front of goal proved to be costly just after the hour mark as Takumi Minamino exquisitely directed a Williams cross into the back of the net; a finish that helped the Reds settle down and enjoy greater spells of possession.

Preston worked tirelessly to try and level the scoring but found themselves 2-0 down in a similar fashion. Kostas Tsimikas put in a hopeful cross that deflected off of the bar, and it was Neco Williams who reacted first to help the ball into Divock Origi who spectacularly flicked over the goalkeeper.

Grinding results when not playing particularly well can help deep runs in cup competitions and Liverpool were clinical tonight from the few chances they created.

Liverpool conceded too many chances and had to rely on Adrian to keep the game all-square. Preston's counter-attack looked to trouble the Reds while the Premier League side struggled to fashion chances of their own.

7 -- Klopp kept faith in some younger players and despite a slightly off performance, it would be harsh to criticise him for fielding a weakened side after the Reds cruised past Norwich City in the previous round. The introduction of Conor Bradley pushed Neco Williams further forward and that tactical change saw his side take the lead.

Adrian kept Liverpool in the match before a second-half flurry led the side to victory. AP Photo/Jon SuperPlayer ratings (1-10; 10 = best, players introduced after 70 minutes get no rating)

GK Adrian, 8 -- Saved well after closing the angle down from Preston's best chance of the first half, and the 34-year-old was there again when the home side looked certain to score from a careless defensive error. It would have been a different game without the efforts of the Spanish goalkeeper.

DF Konstantinos Tsimikas, 6 -- The left-back is normally much better going forward but didn't seem to have a level of chemistry with the attacking players in the box tonight. His crosses lacked the usual intent and were often met by a Preston player, but the final cross that hit the bar did lead to a goal.

DF Joe Gomez, 6 -- The centre-back showed good character after a sloppy first-half performance. Gomez was much more solid after the break, dealing well in a number of situations where he was isolated with Preston's attackers.

DF Joel Matip, 6 -- While Matip didn't make any notable mistakes, the first half performance by the Liverpool defence wasn't good enough. A lack of organisation left the line too high and it was too easy for Preston to create chances.

DF Neco Williams, 8 -- A goal-line clearance came by way of Neco Williams' head as he stood tall against a powerful strike that was destined for the back of the net. The Wales international regularly looked to stretch the play going forward and assisted well for the opener, finding Minamino who finished well.

MF Tyler Morton, 6 -- A mixed game for the young holding midfielder saw him pass the ball well while making some good recoveries of possession, but he was caught out in other moments when pressing with exuberance at the wrong time.

MF Alex Oxlade-Chamberlain, 7 -- The 28-year-old tried to get things moving in the right direction and enjoyed some success from dribbling from midfield positions. A good strike in the second half whistled past the post as he looked the player most likely to break the deadlock.

MF Curtis Jones, 6 -- After a run of good performances, things didn't seem to come off as well for Curtis Jones on the night. While positive going forward, the stubbornness of the Preston defence made it difficult for them to be beaten through the lines.

FW Takumi Minamino, 7 -- A lack of service for the majority of the game saw the forward frustrated, but his patience paid off after he got on the end of a low cross by Neco Williams to direct the ball past the goalkeeper.

FW Harvey Blair, 6 -- The 18-year-old looked tidy in possession but a lack of experience playing from the right flank didn't help on the night. He came close to connecting to an Origi cross in the first half, his only chance of the game before being replaced just before the hour mark.

FW Divock Origi, 7 -- Origi was quiet throughout the game but came to life in the 85th minute with an emphatic flick over the goalkeeper to put Liverpool two goals to the good.

DF Nathaniel Phillips, 6 -- The centre-back made his first appearance of the season after his memorable run of games in the last campaign, and the defensive line looked much more settled after his introduction.

MF Elijah Dixon-Bonner -- On for the final minutes of the game.