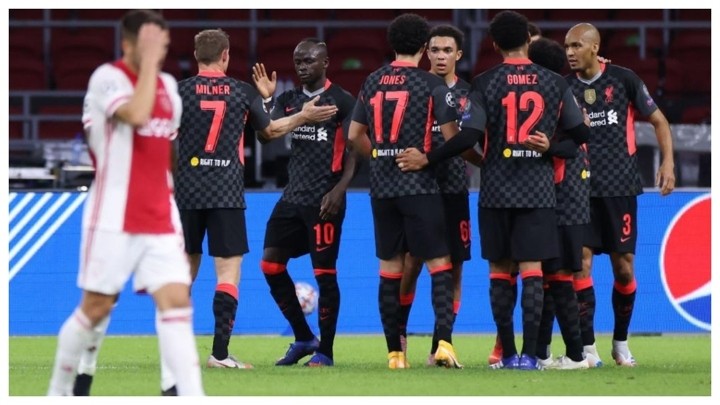 An injury-hit Liverpool side did enough to earn a victory over Ajax in Amsterdam, thanks to good defending and a stroke of good fortune.

The Premier League champions were missing Virgil van Dijk and Alisson Becker and have only won three of eight games without that pair. As if that didn't bode badly enough, Jurgen Klopp was also without Joel Matip and Thiago Alcantara due to injury.

You would have been forgiven for thinking that Liverpool might need a bit of luck in the circumstances and they got it via an own goal by Ajax's Nico Tagliafico after 35 minutes. Seemingly under little pressure, the Argentine defender turned Sadio Mane's fast but wayward shot past his own keeper.

Prior to this Ajax had gone close through Lisandro Martinez, Ryan Gravenberch and Quincy Promes, but a combination of Spanish goalkeeper Adrian and his woodwork kept the Dutch side at bay.

This combination would again deny Ajax in the second half and you got the sense that it wasn't to be their night. In fact, Perr Schurrs had almost scored a second own goal just before the break.

Liverpool did well to keep the score at 1-0 and on the hour mark Klopp risked taking off his star attacking trio, replacing Roberto Firmino, Sadio Mane and Mohamed Salah with Diogo Jota, Takumi Minamino and Xherdan Shaqiri. The gamble to rest his main men paid off as they saw the game out and even had chances to add to the scoreline.

Given the absences and circumstances, Klopp and Liverpool will be delighted to leave Amsterdam with the three points. Next up for the Reds are Danish champions Midtjylland on 27 October. Ajax, meanwhile, travel to Atalanta, who will be on a high after a 4-0 away win against the Danes.