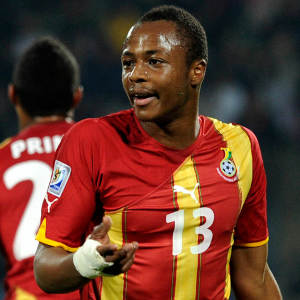 English side Liverpool aiming to bring either Ghanaian midfielder Andre Ayew to Anfield in the New Year, newspapers in England have reported.

Liverpool are on the hunt for a new wide man and will turn their attention to Marseille's Andre Ayew if they are unsuccessful in their pursuit of Niko Krancjar.

While Kranjcar is not an out-and-out winger he has often proved effective deployed on the left flank and at just Â£4m the Reds are keen to add the Croatian to their armoury.

However, that appealingly low price tag is attracting admirers from across the Premier League with cross town neighbours Everton also interested in the player as they seek a replacement for the outgoing Steven Pienaar in the January transfer window.

With the Toffees need seemingly the greater, they might just out bid there rivals forcing Liverpool to pursue alternative targets.

One of those is Ayew who caught the eye with a series of impressive displays for Ghana at the World Cup.

The 20-year-old was a regular for the team that became the darlings of the competition with the player only missing the quarter final exit against Uruguay due to suspension.