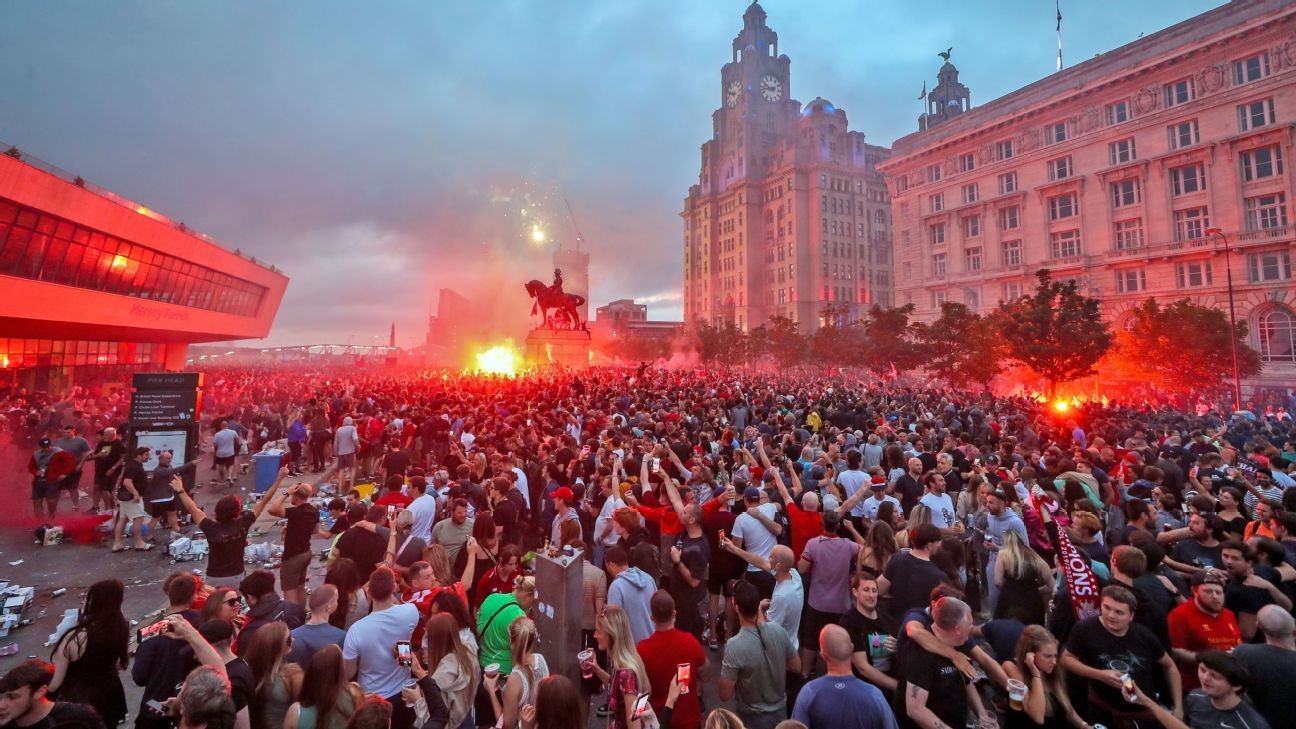 Richard Masters, the chief executive of the Premier League, has said the celebrations of Liverpool supporters following the club's title success "got out of hand," but insisted that the gathering of thousands of fans in the city was a society issue rather than a football problem.

Although a huge gathering of Liverpool fans at Anfield last Thursday following Manchester City's 2-1 defeat at Chelsea, which confirmed the club's first title since 1990, was largely good natured, events in the city centre on Friday evening prompted widespread condemnation from city leaders and the police after the iconic Liver Building was set alight by fireworks released by crowds of supporters.

The Premier League has still to confirm when Liverpool be presented with the trophy for winning the title -- an event which could prompt further celebrations.

But speaking at a governmental evidence session in front of the Department of Digital, Culture, Media and Sport (DCMS) on Tuesday, Masters said that the actions of the Liverpool fans was no different to the mass gatherings at beaches and street parties that have also happened while the UK has been under social distancing measures.

"What happened that night is regrettable," Masters said, when asked about the events in Liverpool last Friday. "It was wrong.

"In the end, we are not in control of individuals' actions and it is possible to celebrate with social distancing. Maybe lots of those people left their homes that night with the intention of doing very much that.

"It obviously got out of hand, in the same way we have seen gatherings on beaches, street parties and all these sort of things going on in wider society. So I see it pretty much as an extension of that -- individuals have to take responsibility for their own actions."

With several issues still to be resolved this season, including relegation and qualification for European competition, there remains the possibility of further incidents of supporters gathering in large groups before the end of this Coronavirus-affected campaign.

And Masters said the Premier League is in ongoing talks with clubs to ensure the season can be finished safely on and off the pitch.

"Obviously we are in constant dialogue with all of our clubs over these issues, constantly reminding of everyone's responsibilities," he said. "We know they take those responsibilities very seriously and, given Liverpool's particularly position in the city and the sensitivity around the fact that they were so near to winning the league, I think Liverpool have played a strong part in trying to discourage the very things that have happened.

"In the end, individuals have to take responsibility for things that have happened."

Masters, who said that "conversations have to intensify" with the EFL over the structure of next season's Carabao Cup, also revealed that the Premier League will attempt to make plans for a worst-case scenario in the future to ensure that rules are in place should the threat of curtailment ever arise again.

"We will have to come to some sort of agreement about what model might be used going forward," Masters said. "What we have all learned in terms of our risk register and forward planning is that we need to deal with these sorts of issues inside our rulebook."