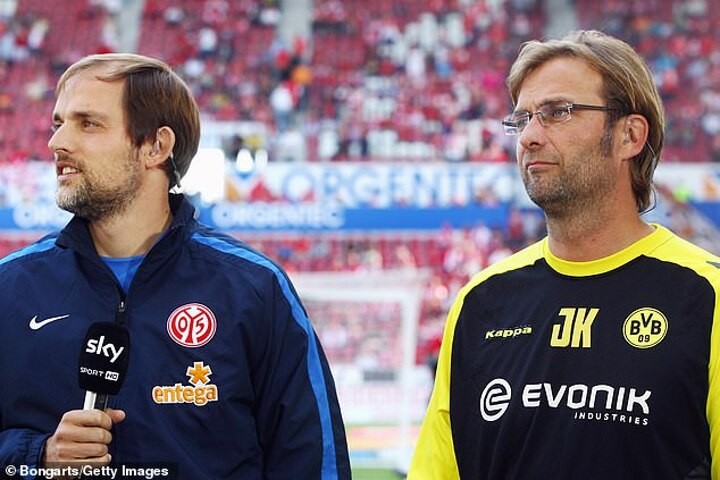 When Jurgen Klopp took up his post at Liverpool in 2015, Thomas Tuchel joked: 'I'm so happy that Kloppo has finally made up his mind... now I know where I'll be going next as a coach!'

Of course, Tuchel ended up at Chelsea but followed Klopp to the Premier League and will pit his wits against his compatriot once more in Thursday's huge game.

Tuchel's career has been intertwined with Klopp's at Mainz and then Borussia Dortmund where the younger man followed in his predecessor's considerable footsteps.

Tuchel had to work his way out of Klopp's shadow and although publicly deferential to the man whose path he traced, a fascinating anecdote suggests in private, the comparisons irk him.

Christian Heidel, managing director at Mainz, gave both managers their first major breaks and recalled putting his foot in it with Tuchel.

'I was saying that we, as a club, had to be a bit more engaging with our public,' he revealed in a recently published biography by Daniel Meuren and Tobias Schachter.

'Then a phrase slipped out and I said: "When Kloppo was here…" At that, Thomas let rip and shouted at me. What was I thinking?

'The conversation was over in that moment. And I thought, 'Oops! I've obviously hit on a sore point'. He was really upset. That's where the rivalry with Klopp stems from.'

Heidel's story offers a great insight into the burden Tuchel must feel in relation to Klopp.

The Liverpool manager was adored at Mainz, as much for his charismatic, warm personality off the pitch as the great success the club enjoyed on it.

When he left, it was a tearful but understanding farewell and Tuchel had a tough act to follow. Upon being appointed, the young manager wanted to distance himself from Klopp, saying: 'Jürgen shaped an era in Mainz. It is my wish to be able to do that too. But I do it my way.'

And he managed it in fine style, even bettering Klopp's record by steering Mainz to the Europa League with a fifth place finish.

It was not a fond farewell. Tuchel left to take a sabbatical having decided that he'd taken the team as far as he could. For all he achieved, he isn't remembered with anything like the affection reserved for their favourite son.

At Dortmund the story was a similar one but the football was often just as thrilling under Tuchel. In his first season, the team scored more goals than Pep Guardiola's Bayern despite finishing behind them in the Bundesliga.

But it was only a German Cup that Tuchel managed to add to the trophy cabinet compared to Klopp's back-to-back league titles, a German Cup and Champions League final.

The fans held a special place in their heart for Klopp in a way that Tuchel never quite did.

You would think that two men with many shared experiences at two of the same clubs would forge a close bond but that has not been the case.

Tuchel said ahead of Thursday's game: 'Of course we know each other but not as good as everybody expects. We never met in Mainz and then I was his successor in Dortmund so naturally, did not meet.'

When Tuchel was appointed as Chelsea boss, the Liverpool manager revealed he had not been in contact with him for a while as he didn't have his phone number.

Klopp said: 'Unfortunately he's a really good manager. I have known him a long time and respect him a lot. This Chelsea squad is a present, I'm pretty sure Thomas sees it like that. They will be good.

'I will give Thomas Tuchel no advice in public! I'm not sure when we play them next, and I don't actually have his number so I couldn't text him. He was in France for a while and I never got his French number! No advice necessary, from my side.'

The relationship, in public at least, seems to be one of mutual respect but the head-to-head record makes for grim reading for Tuchel.

A couple of those encounters have been captivating affairs and some tension bubbled under the surface when Liverpool lost away to Tuchel's PSG in the Champions League group stage in 2019.

Klopp accused the opposition of 'unsportsmanlike' behaviour when his players 'were made to look like butchers' in picking up six yellow cards in the 2-1 defeat.

Tuchel's retort was: 'I did not feel it was such a big issue. We have five minutes overtime, we suffered a lot of fouls - you don't have to do fouls.

'I don't even want to talk about it because for me it is not a subject. When I lose big games I am angry and I talk about stuff just to bring attention away from the result.

'I do this also but it's not my issue. You'll have to ask Jurgen for that and I heard he has his opinion to that and that's fine. I'm talking about the game.'

That win must have been a satisfying one for Tuchel having lost the away game in added time, prompting him to lament: 'Maybe the score didn't tell the story of the game.

'For me, the result was not logical or correct. We conceded two goals in the first half but never at any point did we lose our confidence.'

The PSG games played out against the backdrop of one of Tuchel's most crushing defeats when he was manager at Dortmund.

The German side came to Anfield in the Europa League quarter-final second leg. Leading 3-1 on the night and 4-2 on aggregate with 24 minutes remaining, Dortmund conceded three, the last coming in stoppage time from Dejan Lovren, to put Liverpool through.

Again Tuchel said the game defied logic. He reflected: 'If you expect an explanation, I probably have to disappoint you because an explanation would mean that things are logical or tactical or at least in moments you see where a game goes to the other side,' he said.

'None of this happened. We had a great reaction on the first goal of Liverpool and we scored a third one.

'With the equaliser it was an atmosphere where everybody, except our supporters, believed it was meant to be.'

'Liverpool had no positions any more and it was like everyone here believed in this lucky punch and unfortunately we gave it away.'

Tuchel and Klopp will again share the touchline at Anfield on Thursday night.

They have a shared history that for all the outward mutual respect, is more uncomfortable for the Chelsea boss than the man he followed to Mainz, then Dortmund and now the Premier League.

He will be desperate to deal a heavy blow to the Reds in the scramble for a top four spot and, in private, would no doubt savour a win over Klopp.