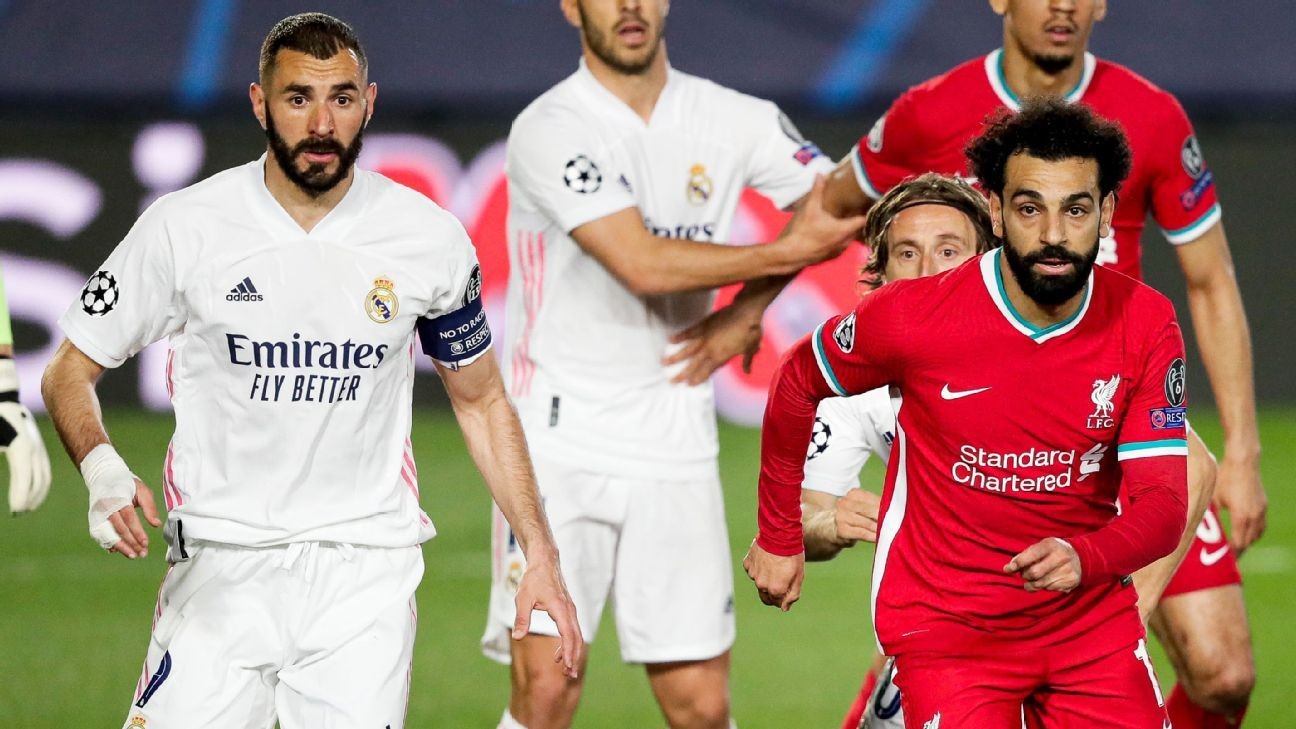 PARIS -- If the Champions League final is the European game's answer to the Super Bowl -- and there are some powerbrokers who would love to make it even more so -- then most will be more than happy with Saturday's contenders. Liverpool versus Real Madrid ticks many of the hype boxes so dear to sponsors and broadcasters, but also likely reflects the current pecking in order in Europe.

There's no fairytale here. There's merit and savvy, quality and confidence, experience and grit. Most observers would rank Liverpool, runners-up in the Premier League and winners of the League Cup and FA Cup, and Real Madrid, winners of LaLiga, as two of the top three club sides in Europe this season. (In case you're wondering, the third member of this season's dominant trinity is Premier League champions Manchester City, who were beaten by Real Madrid in a dramatic semifinal comeback).

Those three were the elite among Europe's already elite super clubs as the others fell to the wayside. Paris Saint-Germain, despite the Neymar-Kylian Mbappe-Lionel Messi frontline, and Chelsea, the reigning European champions, were felled by, yes, Madrid, whose run to the final has seen them knockout multiple potential winners with late comebacks. Bayern Munich and Juventus fell to giant-slaying upstarts Villarreal (themselves beaten by Liverpool, after giving them a scare). Fellow blue-bloods Barcelona and Manchester United also made early exits, burdened respectively by the fallout of a near financial meltdown and the ongoing chaos and psychodrama that is Old Trafford.

So you have two more-than-legitimate finalists. We'll let marketing folk with their consumer surveys work out where they rank, but it's safe to say that in terms of global fan base and brand strength, both Real Madrid and Liverpool are in the top five. Part of the reason why the City of Light's tricolor may as well ditch the blue for the next few days and leave just Madrid's white and Liverpool's red, because that's all you'll see on the streets.

Nobody can question their history, both past and present. Nobody has been European champions more than Real Madrid, who have won it 13 times, dating back to the days when it was called the European Cup (same trophy, by the way, just rebranded as Champions League) in the mid-1950s. But Liverpool have won it six times and victory on Saturday will see them match AC Milan's seven victories in second place. And we're talking recent success, too. This is Liverpool's third trip to the final in the past five years; Real Madrid have won it four times in the past eight campaigns.

But you also have a delicious tasting menu of subplots and backstories.

For a start, in some ways it's a grudge match following the 2017-18 Champions League final in Kyiv. That night, Real Madrid beat Liverpool 3-1, but, for many Reds, the way the game unfolded still smarts. Goalkeeper Loris Karius made two colossal blunders and star forward Mohamed Salah had to be substituted after half an hour following a clash with Sergio Ramos. Salah will be there on Saturday night, along with 18 others from both teams who were involved in Kyiv. Ramos, the sort of player loathed by opponents and adored by supporters, might be temped to be there too, and not just for trolling purposes: after all, he spent 16 years at Real Madrid and now plays for PSG, just a short trip around the Peripherique from the Stade de France.

Then there's the fact that Real Madrid arrive with the ego somewhat bruised. Not the players mind you -- if there's one thing this season's comeback run to the final has taught us is that few can match them for resilience, unflappability and sheer self-belief -- but Madridismo, that great collective (part-philosophy, part-flesh and blood) of supporters and club members itself.After months in which it appeared dead certain that they were signing star striker Mbappe, one of the two heirs apparent to the Messi-Cristiano Ronaldo duopoly, as a free agent, the French superstar said "non" and instead opted to stay at PSG.

It was a shock to many and even prompted Mbappe to personally reach out to Real Madrid president Florentino Perez and give long interviews to explain his decision. It's not just the fact that it throws Madrid's summer transfer plans into disarray, it's the fact that this is a club unaccustomed to not getting its way. Mbappe, who was born and raised just a few miles away, will hang over Madrid fans on Saturday; in spirit, if not in body.

Stewart Robson thinks Mohamed Salah to Real Madrid could still be on despite the forward saying he plans to stay at Liverpool next season.

There's more to ratchet up the hype meter and the star power. Real Madrid have the presumptive Ballon d'Or winner (Karim Benzema) and a pixieish turn-back-the-clock floppy-haired genius who, even at 36, sees and hits passes others can only draw on whiteboards (Luka Modric).

Liverpool have Salah, the Premier League's top scorer, and Sadio Mane: bitter rivals on another continent -- Mane's Senegal outlasted Salah's Egypt in the final of the Africa Cup of Nations -- brothers in goals on the pitch. The goalkeepers, Madrid's Thibaut Courtois and Liverpool's Alisson, are arguably the best in the world, capable of the sort of stand-on-your-head performance that can single-handedly win you a final. Both coaches are wildly popular and quick with a smile, albeit all business in the 90 minutes in their own way: Jurgen Klopp maniacally waving his arms and roving the sideline, Carlo Ancelotti intensely chewing gum and huddling with his assistant, Davide, who also happens to be his son. Klopp is looking for his second Champions League title; Ancelotti his fourth, more than any other manger in the history of the game.

They arrive at the final having taken different paths. Real Madrid wrapped up the Liga title some three weeks ago and spent their final games recuperating and resting their battle-weary stars; Liverpool, who reached the final in every competition they entered, played an FA Cup final and contested a Premier League title right up until the dying minutes of the last day of the season, less than a week ago. (That's another age-old question to be resolved: better to be well-rested, or better to keep the competitive juices flowing until the very end?)

All that's left is for the two teams to take the pitch and deliver. Do not let us down.