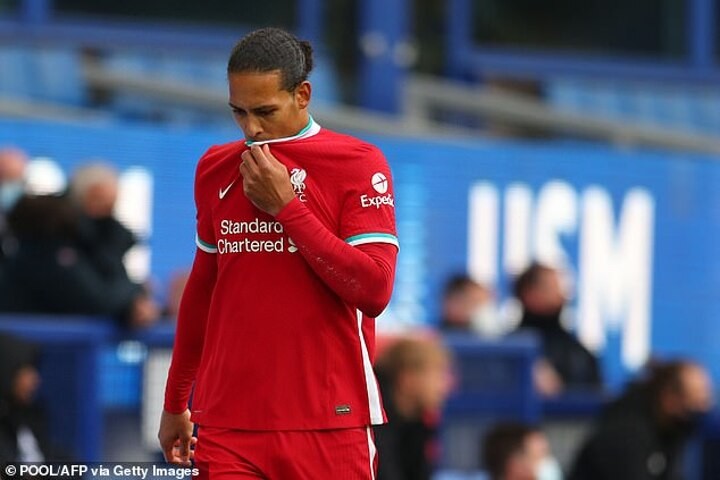 Jurgen Klopp was fidgety and frustrated and in one of those moods when it is hard to get him to engage.

The tipping point came when he was asked about Mohamed Salah scoring his 100th Liverpool goal, with a quite beautiful finish. The inquisitor’s intention was to get some kind of positivity from Klopp but this was absolutely not the moment.

‘The goal was sensational, great,’ said Klopp, with an audible sigh and little conviction. ‘But I am not in the mood. The numbers are crazy but not even Mo wants to talk about that.’

You could say Klopp’s ire stemmed from VAR denying Liverpool a last-gasp winner in the Merseyside derby but the reality was rather more serious.

As Klopp was dealing with these inquisitions, running through his mind was the prospect of being without Virgil van Dijk for the rest of the season.

No one man is ever bigger than the team and it would be ridiculous to say the chances of Liverpool retaining the Premier League this season disappeared when Jordan Pickford hurtled into Van Dijk in the fashion you would expect a security guard to take down a shoplifter.

But sometimes there is an injury to a key performer that can cause a team to lose their balance and nobody should be in any doubt about what Van Dijk brings to Liverpool. The supporters sing a song about him being ‘calm as you like’ and he has been their security blanket for nearly three years.

Van Dijk has made football look effortless in that period and having him as a sentry, standing tall and firm and repelling problems, has allowed the rest of the team to progress. There is not another defender in Europe who has had such a transformative effect.

Consider these numbers: Van Dijk has started 95 Premier League matches for Liverpool since they signed him from Southampton in January 2018. They have conceded just 76 goals and kept 44 clean sheets in that period.

There is more. He has been involved in 812 duels in that period and won 604 of them; Van Dijk has won 464 of the 622 headers he has contested and is second only to Patrick van Aanholt in terms of most goals from a defender. Yes, Liverpool broke the bank for him but he has repaid the investment.

You knew immediately, as he walked gingerly from the pitch, that something was badly wrong. The only time he’s ever needed to be substituted before was against Southampton in September 2018, when he cracked a rib, but he was back playing a week later.

‘I don’t know how many games in a row Virgil played for us,’ said Klopp. ‘He plays with pain, he plays with everything. But he couldn’t play on. That’s not cool.’

The only match Van Dijk has missed for Liverpool in the Premier League was a shootout with Manchester City, in January 2018, with a tight hamstring. The dark reality, however, is that he is now set for a prolonged absence that is likely to encompass the rest of the campaign.

Klopp made a point of saying that Joe Gomez, who replaced Van Dijk on Saturday, had an ‘exceptional’ game when he came on and there is no denying his ability. Joel Matip, too, has been reliable whenever called upon and now they must form a united front.

Both of them, nonetheless, would acknowledge how Van Dijk has helped them. When you also factor in that Alisson, Liverpool’s outstanding goalkeeper, is out until next month, there is a sense that the champions may now be vulnerable.

Points are dropped, refereeing decisions infuriate, but injuries trigger a different set of emotions in a manager. When they are as serious as the one Van Dijk has sustained, they can alter the shape of a season. No wonder Klopp was so distracted.