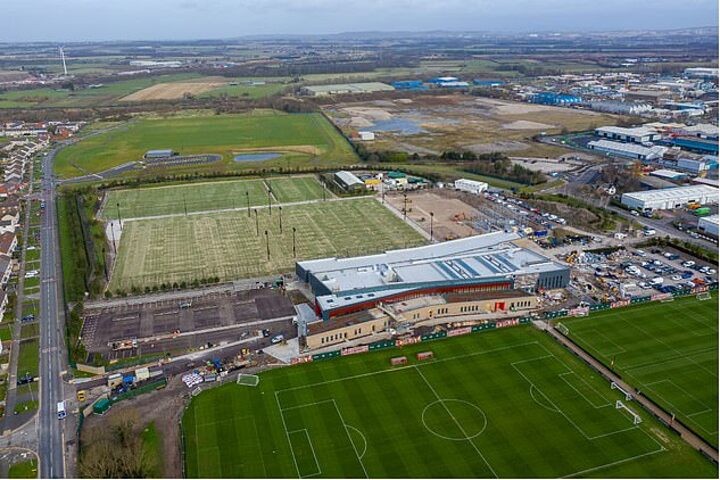 Liverpool are set to finally leave Melwood and move into their new £50million training ground in Kirkby next month.

The Reds were due to make the switch at the end of last season but delays to construction, caused by coronavirus and social distancing measures, held up the move.

The club sold Melwood for £10m but ensured they had the option to stay for the 2020-2021 campaign in the event of unforeseen circumstances. According to The Athletic, Jurgen Klopp approved the decision to make the move mid-season with the manager keen for it to happen during the next international break.

That could mean Liverpool's hotly anticipated clash against Premier League title rivals Manchester City on November 8 will be the final game where preparations take place at Melwood.

Liverpool announced their intention to move to Kirkby, where the academy are currently based, in 2017 with Klopp feeling constrained by the lack of space at their historic Melwood training ground.

'I really love Melwood but football changes,' Klopp said back in 2017, when news of the switch first emerged. 'We cannot avoid this. We can't stay like we always were and hope we can cope with the other clubs.

'Sometimes you have to set standards. It's really good that our owners give us the opportunity to make this big step in the future. Twenty five years ago Melwood set the level. In those 25 years a lot of things happened.

'It's fantastic but we have no space for anything. If we want to have one more office, we don't know where to go. That's the situation. Bringing the Academy and the first team together is one point but it's also about improving a lot of things that we can't improve here. It will only be good for the future of the club. I really believe that infrastructure keeps responsibility up.

'Staying here for the next 25 years wouldn't be good for the club. In this moment we have the idea and the opportunity to do something so we have to wait to see when we can say "yes, take the next step and start".'

Work started in 2018 and was close to completion before the pandemic put a stop to things in March. Construction resumed in May and the complex is now ready for the Premier League champions to move-in.

The Athletic report that captain Jordan Henderson and James Milner were involved in the design process of the 9,200-square-metre complex while Klopp ensured a padel court was built for his pre-training session battles with assistant Pep Lijnders.

There are also TV studios and press conference facilities as well as offices.

The move means the first team and youth set-ups will be brought together but there are no plans to include Vicky Jepson's women's team, who currently train at Tranmere Rovers' Solar Campus base.

Melwood has been Liverpool's home for the last 60 years but will be turned into houses once the Reds have moved out.