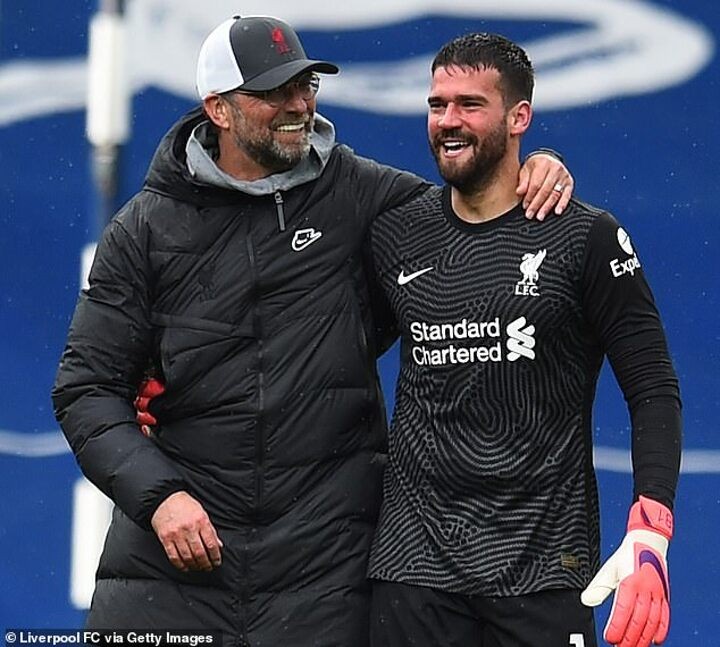 Liverpool will open contract talks with Alisson Becker and Fabinho this summer as the club begin trying to retain their most important players.

Brazil goalkeeper Alisson — the man of the moment after his dramatic header snatched victory against West Bromwich — and his compatriot Fabinho have become key figures since arriving at Anfield three years ago.

Discussions with the pair will start when the players return for pre-season at the start of July.

The immediate priority, though, is capitalising on the opportunity that Alisson’s goal at the Hawthorns has provided.

Two wins from games against Burnley tonight and Crystal Palace on Sunday are likely to secure a top-four spot and Champions League qualification.

Such a scenario seemed improbable at one point but Klopp does not want his squad to think they have done the hard part.

‘I’m sure you agree that six weeks ago no one would have imagined we could get that close,’ said Klopp. ‘That is positive but being close is not being there. Since I am at Liverpool, pretty much every season goes to the wire, for different reasons. I can’t remember a season we haven’t had finals.

‘It was either a big cup competition or we had to fight in the league to the very last second. So, here we are again.

'Now we have to make sure we have something to fight for on Sunday. It is a semi-final and if we win it we have a final. If not, then probably not.

'One of the lessons I learned very early in my life is don’t celebrate the day before the night. We only qualified for the semis.’

When asked if he felt fate was working for Liverpool, Klopp replied: ‘It was a very positive moment (against West Brom) but if we finish the season now we are fifth. There is still a job to do.’