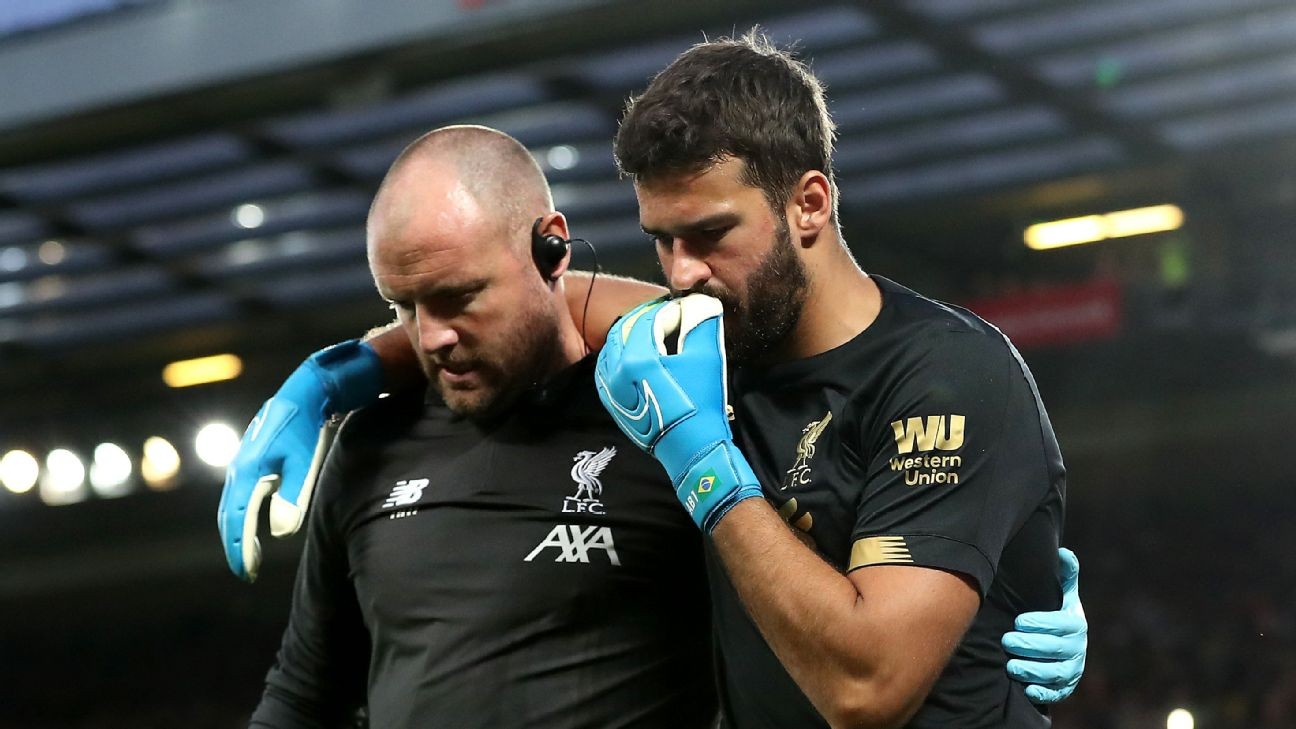 ESPN FC's Alejandro Moreno speaks of Virgil Van Dijk's importance to Liverpool, after the Dutch star-man was awarded UEFA player of the year.

Shaka Hislop presents his weekly power rankings and is given quite a bit of stick by the FC guys for how he ordered the top 10.

After Watford parted ways with Javi Garcia, the FC crew assess the chances that Tottenham's Mauricio Pochettino could leave his post this season.

Alisson's rehabilitation from a calf injury has entered the next phase with the Liverpool goalkeeper doing outside drills during the international break.

The Brazil international has been sidelined since the Premier League opener against Norwich City, but stepped up his recovery at Melwood over the past week.

The 26-year-old has done extra strength work in the gym, but more promisingly, has been able to work on Melwood's pitches to sharpen his footwork, catching and passing.

Liverpool refuse to put a timescale on Alisson's return as they do not want to rush him back, but goalkeeping coach John Achterberg is happy with his progress.

"Ali has been working with Dave [Rydings] in the gym a lot to improve the strength and try to keep the fitness levels up," he told the club's official website.

"In the last few days he has been out on the pitch to do some catching and footwork, as well as small passing drills.

"He has made steady progress, but it is difficult to say how long it will take or how it will progress.

"It needs time and we cannot look too far ahead, so we take each day as it comes, see how he feels, and then make progress from that."

Alisson's deputy Adrian has also been at Melwood during the international break to undertake extra sessions.

The 32-year-old was recruited on a free transfer by Liverpool to replace Simon Mignolet this summer, but was rushed into action just four days after signing without having the time to settle in and get to grips with the club's physical and tactical demands.

"It is really difficult for anyone to replace Ali, especially when you've not had a chance to settle and pick everything up," Achterberg said.

"He had to be straight in after maybe four or five sessions. Then we had two more sessions, played the Super Cup final and then he got the injury, so there was not a lot of time to do extra training.

"Coming to Liverpool, there are high expectations but he has dealt with them really well. He has stayed calm and relaxed and shown a positive, confident manner, which helps the team a lot.

"We thought it would be beneficial to do some more sessions to keep it going, really.

"We did some decent workouts with him. Distribution, crosses, speed and reactions, power -- we worked a little bit on everything just to help him and keep him fit and ready.

"He also had a few days off, but not the full week. We kept it ticking over to make sure he is ready to go again."

Liverpool return to action on Saturday as they look to make it five wins from five in the Premier League with the visit of Newcastle United.