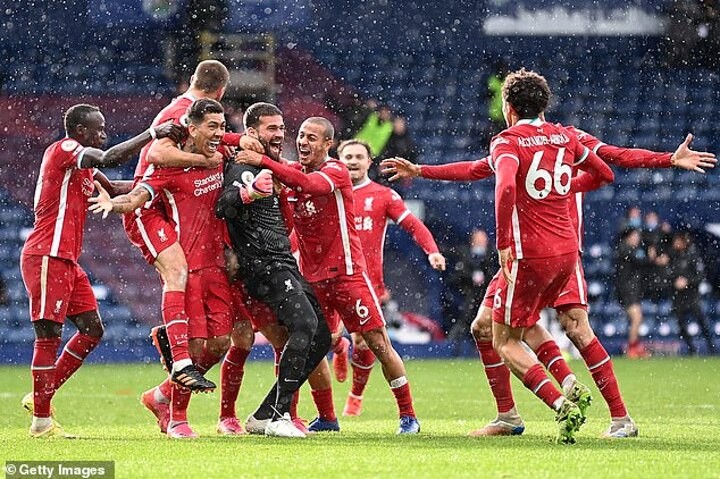 A goalkeeper scoring remains one of the great novelties of football. Something that simply shouldn't happen and occurs so infrequently, you can't help smile.

Even better when the goal carries some significance, as was the case when Liverpool's Alisson Becker kept their hopes of Champions League qualification alive in the 95th minute at West Brom on Sunday.

Sometimes a goal scored by a keeper is a total fluke - the wind getting hold of a goal kick or a deceptive bounce that catches out their opposite number - but Alisson's was a thumping header that any centre-forward would be proud of.

'It couldn't have been a better moment, it's just perfect for today. If he is never doing it again I'm fine, it's a perfect moment,' Klopp said.

Alisson became the sixth goalkeeper to score in the Premier League and it could yet prove to be absolutely priceless as Liverpool chase a top-four finish.

He's far from the first keeper to score a goal of significance, however, and we celebrate some of the best here.

Benevento had won promotion into Serie A, the Italian top flight, for the first time ever. Trouble was, the standard was a bit too good for them.

They had lost their first 14 matches of the season, setting an unwanted record for the top five European leagues, and they looked to be slipping to another loss when they trailed AC Milan 2-1 entering the last few seconds of stoppage time.

But Benevento win a corner and their keeper Brignoli figures he has nothing to lose by charging forward into the Milan box.

He flings himself at Danilo Cataldi's delivery and the ball flies into the bottom corner of the net, sparking wonderful celebrations around the stadium.

'I closed my eyes and dived like a goalkeeper, not a striker,' Brignoli said afterwards.

Alas, it proved a rare highlight in a season that saw them relegated straight back to Serie B by some 17 points.

This was one of many memorable moments in a historic season for Union Berlin as they won promotion to the Bundesliga for the first time.

They defeated Stuttgart on away goals in the play-off to earn promotion and reached that by finishing third in the league table, just one point ahead of Hamburg.

So the late equaliser scored by their Polish keeper Gikiewicz to earn a point against Heidenheim in October ultimately proved crucial.

He was in the right position at the back post to nod home a cross from Sebastian Andersson and spark wild celebrations at Union's atmospheric Alte Forsterei stadium.

The all-time best keeper goal in the minds of English football followers, largely because of the magnitude of the occasion and what was at stake.

On May 8, 1999, Carlisle United were staring relegation from the Football League square in the face as the clock at Brunton Park ticked into injury-time.

Drawing 1-1 with Plymouth Argyle when they needed a win to survive, it looked as though the Cumbrians' league status was about to be lost after 70 years.

Their relegation rivals Scarborough were all set to stay up and their fans had already spilled onto the pitch in celebration at the McCain Stadium.

As a last roll of the dice, keeper Glass runs up for a corner. An initial header is saved but the ball falls perfectly for Glass, about six yards out, and he leathers it into the net.

Cue a manic pitch invasion and eternal hero status at Carlisle plus fame well beyond. Indeed, Glass is probably one of the best known lower-league players ever and remains cursed in Scarborough.

It just goes to show there's always hope in a football match, however late it may be.

As if living proof that all keepers are really frustrated strikers, Masuluke of South African club Baroka scored a spectacular overhead kick that almost won the FIFA Puskas Award for best goal scored in the world.

They were trailing Orlando Pirates 1-0 in the 95th minute of a Premier Soccer league fixture in November 2016 before winning a late corner.

The keeper gets a decent enough punch to the inswinger but nobody banked on Masuluke, who chased the ball almost to the edge of the area before producing a perfectly-executed bicycle kick that somehow cleared the Orlando keeper and several defenders.

It ultimately finished second to an Olivier Giroud scorpion kick in the Puskas Award vote.

Going from the ridiculous to the equally ridiculous, Danish goalkeeper Hansen had the audacity to try a cheeky flying back heel in the dying moments of a 2015 Dutch league game.

Hansen was about 15 yards out when he met a free-kick perfectly with what might be described as a 'mule kick' to earn Den Haag and unexpected point against PSV Eindhoven.

Cue absolute bedlam in the stands and an over-excited commentator.

Great Dane Schmeichel actually scored 13 goals during his career but the most well-remembered comes from his time at Manchester United.

It was a novel moment on an otherwise hugely forgettable occasion for Alex Ferguson's side as the Russian team Rotor Volgograd dumped them out the first round of the UEFA Cup.

Schmeichel's towering stoppage-time header was perfectly-executed and earned United a 2-2 draw but they slipped out of the competition on away goals.

He also holds the distinction of being the first keeper to score in the Premier League when he wellied home a half-volley for Aston Villa in a 3-2 defeat away to Everton.

The best goal Schmeichel scored, however, never counted - an overhead kick in United's FA Cup replay defeat by Wimbledon in 1997, scored from an offside position.

The German keeper is well known to Arsenal fans but before his time keeping goal for Arsene Wenger's Invincibles, he played on both sides of the Revierderby divide in Germany.

Lehmann was a Schalke player when he scored a 90th-minute equaliser against bitter rivals Borussia Dortmund in December 1997.

Coming up for a corner, Lehmann was surely meant to serve as a distraction for the defenders but he actually ended up beating the offside trap to nod home at the back post and make it 2-2.

No doubt that goal was still fresh in the memories of Dortmund fans when he signed for the club a little over two years later.

That was actually Lehmann's second league goal for the club, having scored a penalty in a 6-2 win over 1860 Munich in March 1995.

Colourful character Chilavert was a great keeper but also blessed with a hammer of a left foot and he racked up 67 goals in his career, including eight for his country Paraguay.

One of the most famous came in qualifying for the 1998 World Cup, when he rifled home a low free-kick from some 30 yards out to secure an important 1-1 draw in Buenos Aires.

It helped Paraguay qualify for their first World Cup finals in 12 years.

That was one of two World Cups Chilavert went to and he once scored a hat-trick of penalties as Velez Sarsfield won their derby with Ferro Carril Oeste 6-1.

And one of his best strikes was an outrageous quickly-taken free-kick from inside his own half for Velez against River Plate in 1996. It was a moment so unexpected the TV cameras missed it.

Higuita's nickname was 'The Madman' and with good reason. Best known for his 'Scorpion Kick' when Colombia played England at Wembley in 1995, he also scored plenty of goals - 41 in total during an eventful career.

A clean striker of a free-kick or a penalty, Higuita often ventured upfield to take charge of a set-piece opportunity.

Less than a month after the 'Scorpion Kick' moment, Higuita smashed in a crucial goal to propel his club Atletico Nacional towards the final of the Copa Libertadores.

He walloped a free-kick that crashed in off the underside of the bar as his team beat River Plate 1-0 in the semi-final, first leg.

Higuita also converted a penalty in the shootout that decided the tie.

In a career that spanned a quarter-century, Brazilian Rogerio Ceni scored an astonishing 131 goals. Plenty of strikers would be delighted with that, let alone a keeper.

He took penalties and free-kicks for his one club Sao Paulo and by the end of his career in 2015 was actually in the club's top 10 scorers' list.

There were incredible scenes when he came forward to score his 100th goal - a free-kick against Corinthians in 2011.