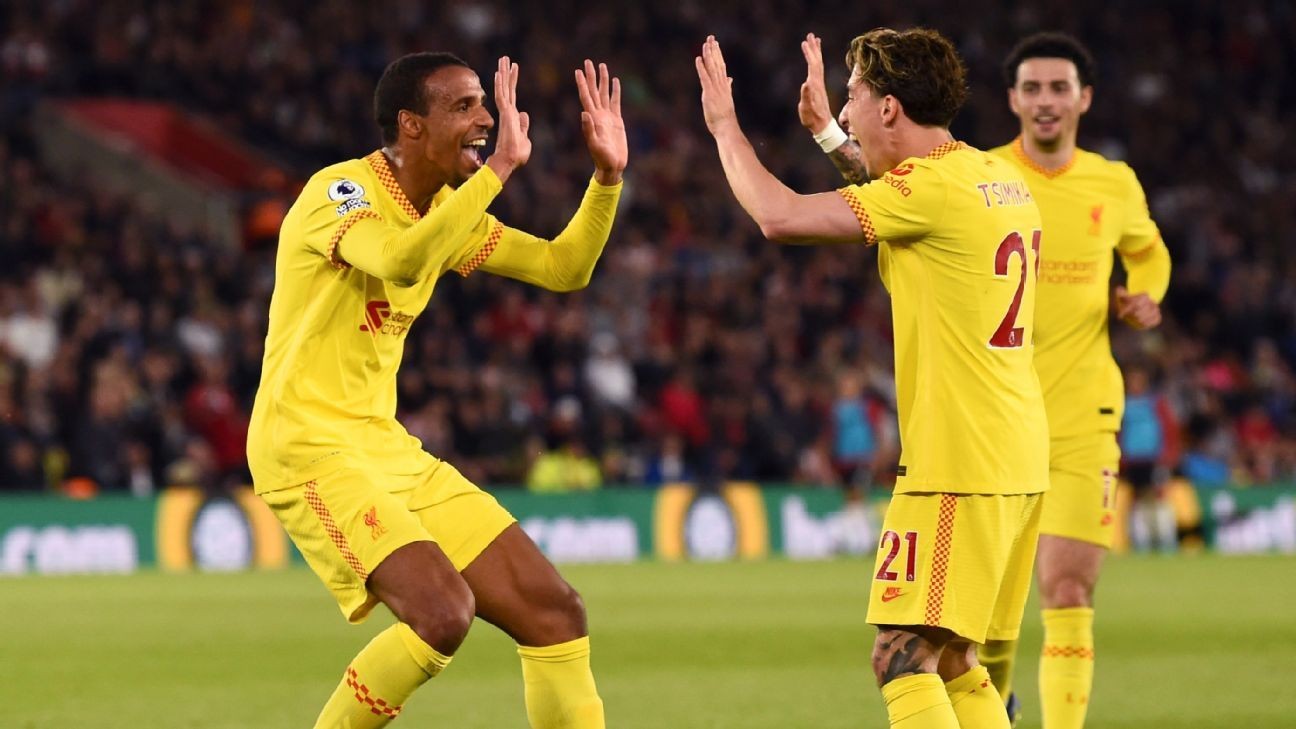 SOUTHAMPTON, England -- After a case of history repeating, Liverpool have earned the chance to find out if destiny is calling.

The Premier League title race will go to the final day of the season after Takumi Minamino and Joel Matip struck to overturn Nathan Redmond's 13th-minute opener to ensure the Reds beat Southampton 2-1 here at St. Mary's Stadium.

For the second time in seven days, Liverpool boss Jurgen Klopp made a host of changes, watched his team fall behind before responding impressively to earn a deserved win on Tuesday. Last week it was Aston Villa, and although Southampton were much more culpable, this still felt like a stiffer test of Liverpool's resolve, coming less than 72 hours after their marathon FA Cup final win over Chelsea on penalties, a draining exertion that prompted nine changes to Klopp's starting lineup.

Where would Man United be without Ronaldo? How he saved a grim season from total meltdown1dMark OgdenMan City keep Premier League title in reach, Liverpool win FA Cup, Lewandowski wants out of Bayern1dGabriele MarcottiHow VAR decisions have affected every Premier League club in 2021-2212hDale Johnson

Mohamed Salah and Virgil van Dijk were missing as expected after picking up injuries at Wembley, but the sheer volume of absentees felt even greater than first feared: Trent Alexander-Arnold, Andrew Robertson and Sadio Mane were all left out completely while Thiago Alcantara, Naby Keita, Jordan Henderson and Luis Diaz were rotated onto the bench.

To perfectly encapsulate the madcap menagerie Klopp assembled for this task, James Milner began as a No. 6 with Harvey Elliott playing slightly ahead of him in midfield. It was the first time they had even been named in a starting lineup together and Milner, 36, made his Premier League debut in November 2002, 145 days before Elliott was born.

Liverpool really are a team for the ages. The Quadruple bid remains alive, albeit firmly in the balance with Manchester City holding a one-point advantage ahead of Sunday's final round of matches.

"Making nine changes, if it hadn't have worked out it would have been 1000% my responsibility," Klopp said. "Now it worked out and it is 1000% the boys' responsibility because I can ask for a lot, the boys have to do it. I thought they did exceptionally well, some incredible performances.

"Actually, I am so happy about the performance because it was a bit touching to be honest. Wow, these boys. Like having Ferraris in the garage and then you let them out and they directly go like this. Harvey, I'm not sure when he played last time, Curtis [Jones], no rhythm, Minamino, it is a crime he is not playing more often.

"It is really tough for the boys but whatever happens this year happens because of this group. It is exceptional and tonight they showed it again."

Southampton offered a contest largely in name only. Redmond's opening goal was a bolt out of the blue, a well-struck shot which benefitted both from a deflection of Milner and VAR's decision not to revisit a foul by Lyanco on Jota in the build-up.

Jurgen Klopp offered effusive praise for the Liverpool players who stepped up to beat Southampton on Tuesday, despite not being usual starters, to push the Premier League title race to the final match day of the season. Andrew Powell/Liverpool FC via Getty Images

Minamino's 27th-minute equaliser was the product of a fine move that began with Joe Gomez firing a ball into Jota, who laid it off to the Japan international to fire home his tenth goal of the season.

Minamino is something of a statistical curiosity in that he spent the second half of last season on loan at Southampton, starting nine Premier League matches, more than the five he has managed for Liverpool in almost two years since arriving from Red Bull Salzburg. Yet no player has scored at least three goals in the League, Carabao Cup and FA Cup this season and, remarkably, Minamino was Liverpool's top-scorer in the latter two competitions.

After Liverpool lost Gomez at the break to an ankle injury, Henderson came on with Milner switching to right-back but the pressure on Southampton's goal was unchecked.

Matip may not have known much about the winner, coming as it did as he battled with Kyle Walker-Peters to head Kostas Tsimikas' corner after Mohamed Elyounoussi's inadvertent flick-on, but it was no less than Liverpool deserved on the night.

Southampton ended with an xG, or expected goals, of 0.14 from four shots, 29% possession and boos from the home crowd, many of whom showed what they thought of the planned "lap of appreciation" by immediately heading for the exits.

Arguably the most defiant resistance all night came from the stadium DJ, intent on several half-time swipes at the opposition. Three days on from Liverpool supporters booing the English national anthem and multiple members of the Royal Family including Prince William, the interval playlist was particularly pointed. Sex Pistols' "God Save The Queen" was followed by Spin Doctors "Two Princes" and Meatloaf's "Two Out of Three Aint Bad." It might yet be three out of four for Liverpool or, remarkably, all four after a precious win that keeps them in the hunt.

However, all that stands in the way of City and a fourth title in five years is Steven Gerrard, the most iconic and influential Liverpool player of the Premier League era now in charge of their opponents on Sunday, Aston Villa. Pep Guardiola's side hold a one-point and six-goal advantage over Liverpool, who must beat Wolves and hope for a favour from their former talisman. Klopp won't be making contact.

"Of course [the title] is unlikely because City play at home against Aston Villa, who play only on Thursday," said Klopp. "It will be tough against Burnley [for Villa] -- they fight for survival."

The mischievous Southampton DJ greeted full-time with the Killers' song "Mr. Brightside," the chorus of which includes the line: "But it's just the price I pay, destiny is calling me."

Liverpool have paid the price for a mammoth 63-game campaign which has left many players fatigued or carrying injuries. We will all find out on Sunday if destiny really is on their side.