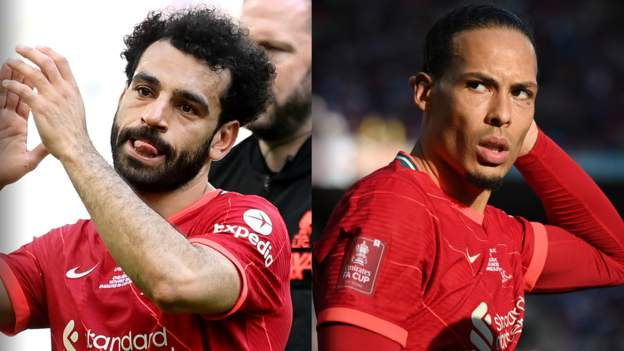 The pair went off during Saturday's FA Cup final win over Chelsea at Wembley - Salah with a groin problem, Van Dijk with a knee injury.

Reds boss Klopp is confident both will return for Sunday's season finale against Wolves at Anfield.

"The target is they could be involved again at the weekend," said Klopp.

"It's very positive. We're realistic about the Wolves game, but for tomorrow, [we'd] rather not."

The Football News Show: Will fatigue be an issue for Liverpool in the title race with Man City?

Salah is currently the Premier League's top scorer with 22 goals this season.

Fabinho is out of Tuesday's game with a muscle injury while Andy Robertson, who had cramp on Saturday, is also a doubt.

Liverpool trail Premier League leaders Manchester City by four points, with the trip to Southampton their game in hand. Defeat at St Mary's Stadium would end their title chances.

Southampton pair Fraser Forster and Stuart Armstrong could be available this week, either for the visit of Liverpool or at Leicester on Sunday.

Both have been struggling with back and knee problems and only returned to training at the weekend.

Southampton have lost eight of the past nine league meetings, with the exception in that run being a 1-0 home victory in January 2021 courtesy of an early Danny Ings goal. Saints can win a home league match against Liverpool in successive seasons for the first time since 2003-04 and 2004-05.Liverpool defeated Southampton 4-0 at Anfield in the reverse fixture last November.

They need four points from their remaining two games to eclipse last season's final tally of 43.Southampton have lost seven of their 10 most recent league matches, as many defeats as in their opening 26 fixtures of the season.It's four losses in five home games for Ralph Hasenhuttl's side.Only one of James Ward-Prowse's nine league goals this season has been scored at St. Mary's Stadium.

A Liverpool defeat would confirm Manchester City as Premier League champions.The Reds have won 18 of 19 matches this season against teams currently in the bottom half of the table, only dropping points in a 3-3 draw at Brentford in September.They have kept 21 Premier League clean sheets this season, a joint high alongside Manchester City and one short of equalling the club record set in 2005-06.Liverpool could reach 10 top-flight away clean sheets in a campaign for the first time since 1984-85, when they ended with 11.

Choose your Southampton starting formation and line-up. It's up to you how to approach it - you could go for the team you WANT the boss to pick or the one you THINK he will.

Choose your Liverpool formation and starting line-up. It's up to you how to approach it - you could go for the team you WANT the boss to pick or the one you THINK he will.