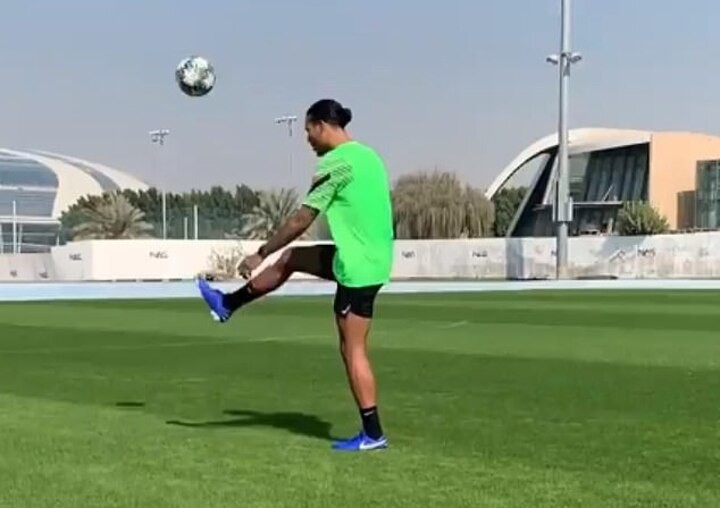 Virgil van Dijk was spotted kicking a ball for the first time since his horror knee injury in a boost to Liverpool's title hopes this season.

The Dutch defender has been sidelined since October after he ruptured his anterior cruciate ligament in the Merseyside Derby against Everton following Jordan Pickford's tackle.

The Dutch defender has been recovering in Dubai over the winter period at the NAS Sports Complex where several athletes and stars opt to train during the off-season.

And the Dutch defender shared a video of him on his Instagram story of him practicing some ball work in his rehabilitation journey.

There were fears that the 29-year-old is set to be out for the rest of the season with the ACL problem but images and footage of the defender working hard in Dubai is giving Liverpool fans hope he can return in time for the title run-in.

The Dutchman's absence, along with other injury concerns for Joe Gomez and Thiago Alcantara, have contributed to the Reds losing top spot as they try to defend their top-flight crown.

Victory at Anfield will see Jurgen Klopp's side return to the Premier League summit on goal difference though any other result will see Ole Gunnar Solskajer's United remain top as England's top division inches towards the half-way stage.

Van Dijk was joined in Sunday's rehabilitation session with former Liverpool defender Dejan Lovren - now at Zenit St Petersburg - who is training out in Dubai during the Russian off-season.

The defensive duo were team-mates at Anfield for two-and-a-half years between 2018 and 2020 and Lovren revealed that van Dijk is looking 'stronger than ever' in his rehabilitation at the moment.

Lovren tweeted: 'It was nice to see my former teammate @VirgilvDijk today. A tough injury he had, but he looks stronger than ever, soon brother you will be on top of your level again. Good luck to @LFC in today's derby. We are with you!'

Seedorf posted a photo of him and van Dijk in rehab together in December, adding the caption: 'Verified I joined the captain @virgilvandijk for some #training today! Happy to see his determination and hard work to be back on the pitch stronger than before!

'In these type of journeys, patience and focus are key to succeed. Keep it up my brother! Also thanks to H.H. #Sheikh Hamdan Al Maktoum @faz3 for the hospitality.'