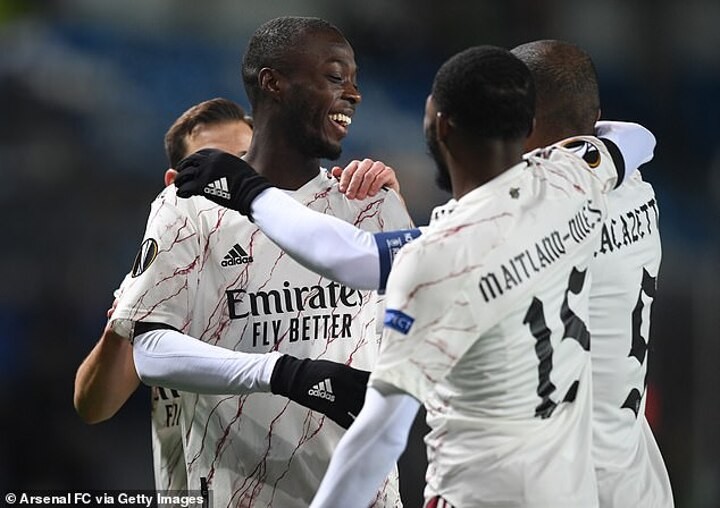 Freddie Ljungberg is confident that Nicolas Pepe will 'come good' at Arsenal despite his recent struggles.

Pepe received much criticism after he was sent off during Arsenal's draw against Leeds last weekend for headbutting Ezgjan Alioski.

The winger has struggled for consistency since he joined Arsenal from Lille in the summer of 2019 for a club record fee of £72million.

However, Ljungberg, who worked with Pepe last season, believes that the 25-year-old can be a success for Arsenal.

Ljungberg stressed that it is important that Pepe isn't criticised too harshly for his mistakes.

Ljungberg told The Athletic: 'I think Nico will come good. Nico wants to work. Every player makes mistakes. I got sent off at Spurs!

'Don't slaughter them too much because it happens to all of us.

'The important thing is how they react afterwards and if he knuckles down, works even harder and still tries to prove himself. He's not had the easiest time, there's a lot of focus on him.

'I could say easy things like, 'Yeah, he needs game time'. OK, but you have a lot of other players as well who need game time. That's what is difficult.'

Pepe bounced back from his misdemeanor against Leeds by scoring in Arsenal's Europa League victory away to Molde.

The Ivory Coast international has produced several moments of brilliance for Arsenal but is often on the periphery of games.

In total Pepe has 12 goals and 12 assists for Arsenal in 56 appearances, while he helped the Gunners to win the FA Cup last season.

Pepe will be suspended for Arsenal's next three Premier League games, but he will still be able to feature against Rapid Vienna in the Europa League next week.

He will hope that he will be able to get back into the starting lineup when he is available, although there is competition from the likes of Willian and Reiss Nelson.