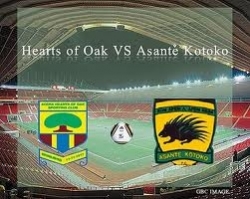 Millions of local fans could miss out on watching the biggest game of the season on television due to delays in settling a dispute between Asante Kotoko and Metro TV.

The two biggest clubs in the country will clash in the countryâ€™s version of the â€˜El Classicoâ€™ at the Baba Yara Stadium on April 15.

But delays in finding a lasting solution to the feud between the Premier League broadcaster, Metro TV and the Kumasi-based club is threatening the live telecast of the game to millions of passionate fans in Ghana and on the continent.

The Accra-based television company has been restrained from covering Kotoko games following alleged attacks on commentators and equipments by irate fans during their Premier League win over champions Berekum Chelsea on December 14, 2011.

The irate fans, believed to be unhappy with comments from seasoned commentator Christopher Opoku and his summarizer Nana Agyeman following a controversial penalty awarded Kotoko, vandalized some of their equipment and threatened to beat them up.

But television replays shows they were spot on.

The Disciplinary Committee has been unable to rule on the matter with barely 10 days left for the cliff hanger with the television station demanding Kotoko to bore the cost of the destroyed equipments.

The Baba Yara stadium has a 40,000 capacity and therefore means thousands will not get the chance to watch the game if the DC failed to resolved the impasse between the two parties in time.

Itâ€™s widely feared the situation could also lead to overcrowding at the stadium as many will want to watch their idol club and that could also come with huge security implications for authorities.

Local fans want the matter to be resolved quickly.

â€œWe believe that if the case is not resolved in time, we may all live to lick our wounds because it could lead to a disaster,â€ President of Sports Callers Association of Ghana Nko Joseph told GHANAsoccernet.com

â€œThe case should be put in the category 'A' so it is settled quickly for the game to be shown on television.

â€œThe situation on our league table makes it even scary since a win for either side will have serious dimension on the standings.

â€œThe cause of many disasters at our stadiums in the past have been partially attributed to overcrowding and thatâ€™s what we fancy will happen if the game is not shown on television.

â€œWe have petitioned the FA and we hope the matter will is resolved soon,â€

Failure to broadcast the game will also be a major blow to the drive of promotes the popularity of the local game which eroded in the past with the invasion of EuropeanÂ leaguesÂ on the television in Ghana.

Having dominatedÂ the localÂ football scene for the past 50 years, they share forty league titles as the Porcupine Warriors attempt to end their four-year trophy drought.

Both teams have been playing catch-ups to the new forces that have emerged in the past two years.