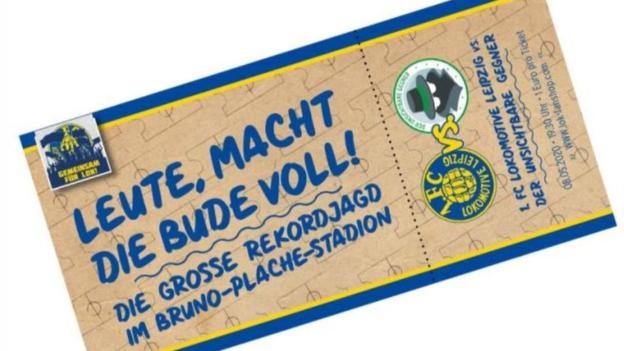 A German fourth-tier club have sold more than 100,000 tickets for a match against an "invisible opponent" - despite averaging crowds of 3,000.

Lokomotive Leipzig have been selling e-tickets for one euro (88p) each for the event, scheduled for 8 May.

They are planning it to help cope with financial pressures resulting from the suspension of football in the country because of the coronavirus pandemic.

The club won the first German championship in 1903 as VfB Leipzig.

Lok's campaign started on 19 March and their target is 120,000, which they claim was the attendance for their 1987 Uefa Cup Winners' Cup semi-final home leg against Bordeaux.

Their highest gate this season at Bruno Plache Stadion was 4,498 against Energie Cottbus, and their average matchday revenue is 30,000 euros (£26,300).

A spokesperson for the club told BBC Sport that what was planned for 8 May remains a secret.

"There's going to be a live stream from the stadium, the floodlights will be switched on and our internet radio commentators will be working on the game," he said. "I can't tell you more at the moment."

He added: "The money will be used to keep Lok running - we have 300 youth players, we need to pay the staff and look after the facilities."

The 126-year-old club made regular appearances in European competition in the 1960s through to the 1980s.

The Cup Winners’ Cup run of 1987 was particularly memorable, ending in the final with a 1-0 defeat by Ajax, whose goalscorer was Dutch great Marco van Basten.