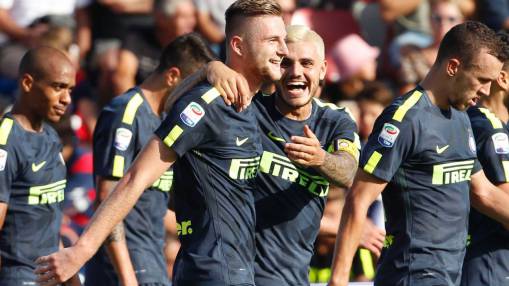 Inter Milan boss Luciano Spalletti praised the "sacrifice" of Ivan Perisic for leading his side to a 2-0 win away to Crotone on Saturday.

After Milan Skriniar broke the deadlock in the 82nd minute, Perisic scored in stoppage time -- his third goal of the season.

And Spalletti said Perisic's leadership was a crucial factor in Inter opening the campaign with four consecutive victories.

"Perisic sacrificed himself a lot," Spaletti told Mediaset Premium. "Leaders show themselves when the team needs them and Ivan has shown that he is important in these opening matches.

"Teams that want to get results think this way, by dividing up strengths and weaknesses and by taking on responsibility when their teammates are in difficulty."

Spalletti said he was also pleased with Inter's ability to adapt against Crotone's staunch defence in difficult conditions.

"It was not easy and our players were very professional, adapting to a style of game they were unaccustomed to," he said.

"It was very hot in Calabria, the pitch was very dry and slowed down the pace of the ball, while the wind also created problems in the first half.

"We were a little more fluid after the break, then Crotone tried to get it on second balls, flick-ons and Ante Budimir did a great job. Adapting to all of this is a sign of great quality."

But despite Inter's position atop the table, Spalletti wasn't getting carried away this early in the season.

"We are not interested in the table right now, we just did what we had to do," he added. "It's a long road ahead of us and we won't get swept up in the moment. There are another 34 matches to go and we've got to win as many as possible.

"I think the team showed character, but we should've moved the ball around faster in the build-up play. Losing those balls cost us a few dangerous counter-attacks. Perhaps there wasn't much quality, but certainly character."