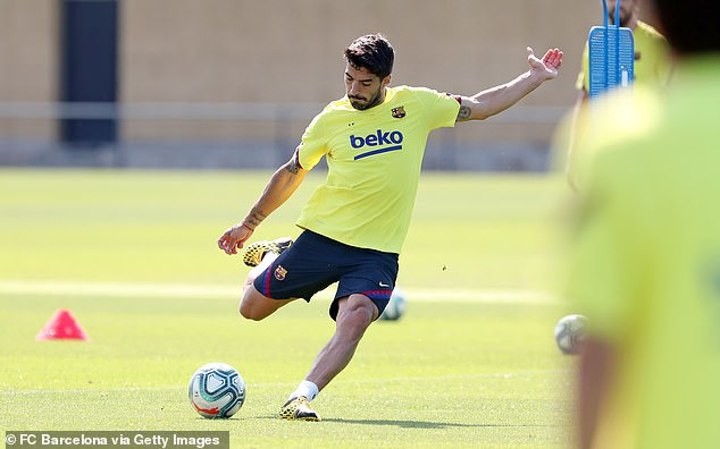 Barcelona have revealed that striker Luis Suarez has been cleared by team doctors to play when the Spanish league resumes next week.

Uruguay striker Suarez had arthroscopic surgery on his right knee in January and was expected to miss the rest of the season before La Liga was suspended due to the coronavirus pandemic.

However, the club said on Saturday that he has received the all-clear from the doctors and will therefore be available for Barcelona's first match in almost three months when they travel to relegation-threatened Mallorca on June 13.

His last appearance for the Catalan outfit was in their semi-final defeat to Atletico Madrid in the Supercopa de Espana at the beginning of January.

But after more than four months out due to the injury, the Uruguayan is now ready to return for the final part of the season, with 11 league games left to play.

Suarez himself took to social media to express his delight at his imminent return, stating: 'After so much effort, sacrifice and work, I have finally registered the all-clear.'

The 33-year-old former Liverpool striker may be thrust into having to lead the attack, with Lionel Messi receiving treatment on his right thigh.

The Argentine has a minor muscle injury and is training separately as a precaution ahead of the restart.

Barcelona top the La Liga table and are two points clear of arch rivals Real Madrid ahead of the remaining rounds, which begin when Sevilla take on Real Betis in the Seville derby on June 12.