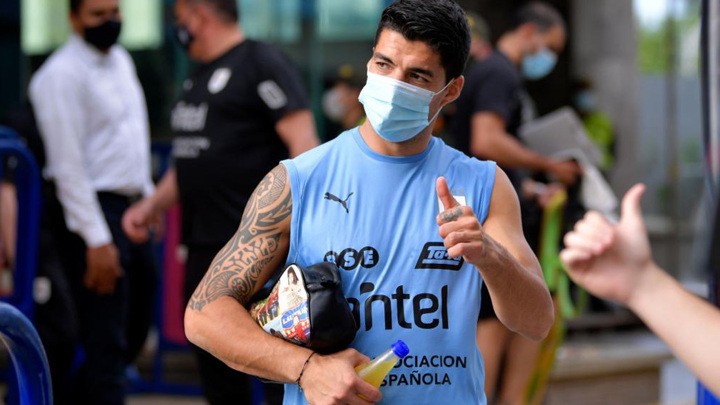 Luis Suarez is currently in quarantine after testing positive for COVID-19 whilst on international duty with Uruguay, and the Atletico Madrid striker has openly apologised about what happened.

As a result of testing positive for the virus, Suarez was forced to miss Saturday night's reunion with Barcelona, a match that Atletico won 1-0.

The 33-year-old has accepted that if he and his Uruguay teammates contracted the virus, they would accept responsibility.

"There are a lot of people who are criticising us," Suarez said. "We made a mistake and we ask for forgiveness.

"We don't have to make it so big; we have to recognise it as far as we are concerned. We will take charge if the responsibility was ours."

Following the news that several members of the Uruguay squad had tested positive, a video and a photo of the players having a BBQ and passing around mate went viral.

"The contagion did not come from the photo, that is clear," Suarez recognised.

"We had the bad luck to have an infected person from Colombia. Matias Vina's positive result was a very hard blow for the whole team."

Given the situation of the pandemic and the positive developments that have taken place, Suarez admits that they may have taken their eye off the ball.

"We lowered our guard a little, but we have to be realistic - it is inevitable," he said.

"Let this serve all young people and all people that no one is immune. That we have to take care of ourselves beyond getting checked every day."

The striker is having to quarantine as a result of testing positive, and he explained one of the tougher parts of having to go through this process.

"As a father I'm having a really bad time," Suarez stated. "I can't see my family after many days of being away from.

"I am locked in a flat. My children didn't know I had come [back to Madrid] and they visited me from a window 50 metres away. It is very difficult."

Finally, he highlighted the good atmosphere at his new club.

"The Atletico Madrid dressing room has many similarities to the [one with the Uruguayan] national team," Suarez noted.

"I am enjoying a coach who is highly valued worldwide," he added in reference to Diego Simeone.