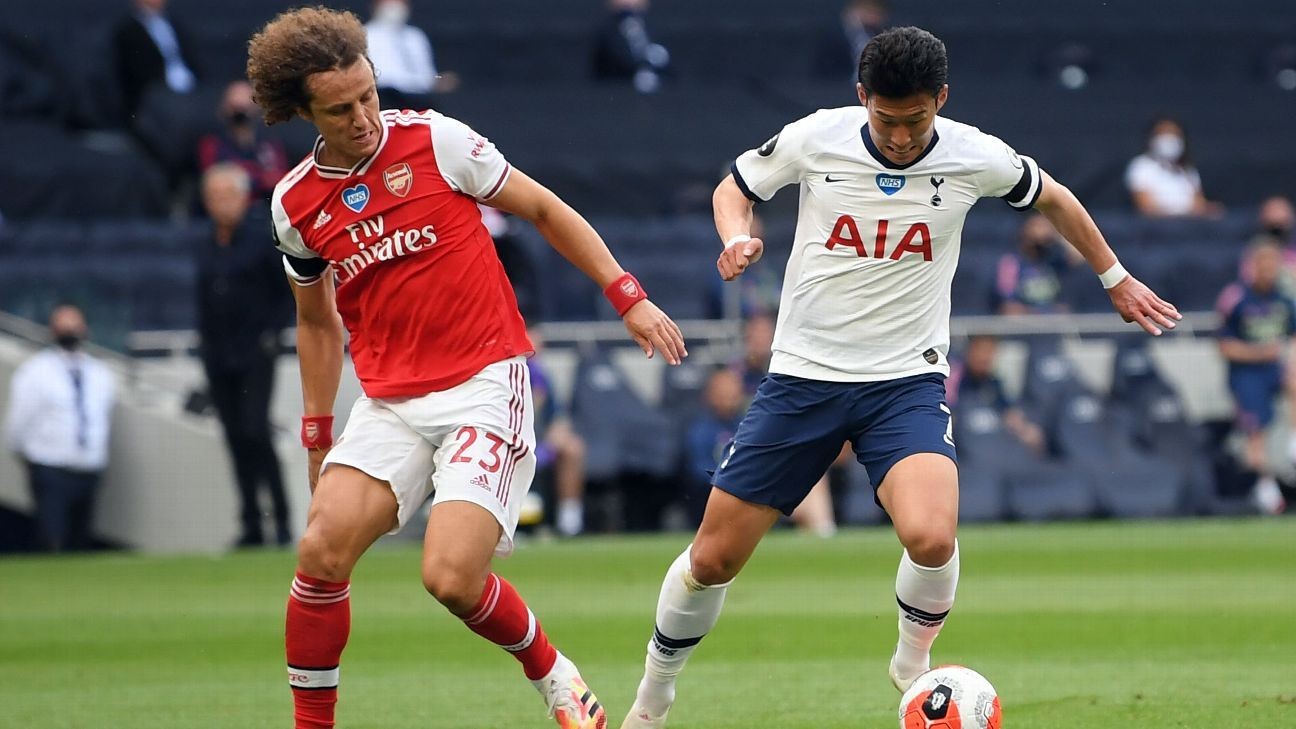 Arsenal's European hopes are hanging by a thread after they were beaten 2-1 by Tottenham Hotspur in Sunday's North London derby.

Alexandre Lacazette fired them ahead with just 16 minutes on the clock, but that advantage only lasted three minutes before Son Heung-Min brought Spurs back into the game after pouncing on an untimely error. The score was still deadlocked deep into afternoon until Toby Alderweireld headed home to claim a huge three points for the visitors.

Whenever there was a risk of them being dragged into a firefight, Arsenal regained their composure and slowed down the pace of the game to neutralise Tottenham -- which often led to some nice short passing. As a collective unit their vision on the ball is improving, and that's a credit to the work that's being done behind the scenes in order to focus on avoiding complacency from the first minute until the very last.

There was far too much space being allowed on the ball for Tottenham, especially through the middle of the park where Arsenal consistently left gaps galore. While their rivals didn't exactly have many sustained periods of pressure, Arteta's men always struggled to play themselves out of danger -- and there were far too many players in a red shirt that looked afraid to make a challenge.

5 -- There's an argument to be made that Mikel Arteta had more well-rounded defensive options on the bench and should've mixed it up with his starting XI, but it was still a pretty attacking line-up that was always going to cause Spurs problems.

It's clear to see that he wanted his side to be expressive but they didn't really expose the hosts' narrow setup at the back. In terms of the substitutions, his tactic of leaving it late before making slight adjustments didn't pay off with the Gunners fizzling out in a big way.

David Luiz and Arsenal's defence were underwhelming in their loss to Tottenham Hotspur. MICHAEL REGAN/POOL/AFP via Getty ImagesPlayer ratings (1-10; 10 = best, players introduced after 70 minutes get no rating)

GK Emiliano Martinez, 8 -- This was verging on another Man of the Match performance from Martinez with his best moments being the tipped Davies save onto the bar and getting down low to prevent Son from scoring in the second half.

DF Shkodran Mustafi, 5 -- While he was far more impressive and risk-averse than his fellow defenders, he once again faded late in the game with a few mistakes almost opening the door for Harry Kane to score.

DF David Luiz, 5 -- The Brazilian didn't exactly cover himself in glory for the equaliser, but in a general sense, he was far too eager to drift out of position with his slow reaction times being a constant source of concern.

DF Sead Kolasinac, 4 -- Failing to track back is one thing, but Kolasinac's diabolical backpass for the opener is unforgivable.

DF Kieran Tierney, 5 -- The youngster played a helping hand in the opener and looked on the money in the first half, but he couldn't keep that pace up in the second, and he even he lost his marker for Tottenham's winner.

DF Hector Bellerin, 6 -- He helped bring Pepe into the game and even put the ball on a plate for Aubameyang in the 13th minute, but any confidence he showed disappeared late on as the pressure of the derby rose.

MF Granit Xhaka, 6 -- It was a bright start for Xhaka after he battled hard to assist Lacazette's goal, but from misplaced passes to constantly moving the ball in a negative direction, it was another uneven performance.

MF Dani Ceballos, 8 -- The intricate nature of his play allows him to cover Xhaka well, and beyond that, his natural ability will always help to add some creative flair to this team.

FW Nicolas Pepe, 5 -- He's great at cutting inside and turning his marker, but the former Lille star's delivery needs a lot of work.

FW Alexandre Lacazette, 8 -- The fan favourite worked incredibly hard and fought for every single ball, and his determination paid off as he smashed Arsenal into the lead with a belter of a strike.

FW Pierre-Emerick Aubameyang, 6 -- Rattling the crossbar was as close as Auba got to making a real difference today with his 13th minute scuffed shot proving to be a crucial moment.

DF Cedric Soares, N/R -- The spirited defender was active after being brought on, with many believing he should be considered for a start given how the season has panned out.

MF Joe Willock, N/R -- His tenacity bodes well for what the future could hold for him at the Emirates, but he couldn't inspire a comeback.

FW Reiss Nelson, N/R -- Was all but invisible during his brief cameo with many questioning why he was brought on in the first place.

FW Bukayo Saka, 6 -- He may have been a hero since the restart, but he simply couldn't get the kind of service he needed today.