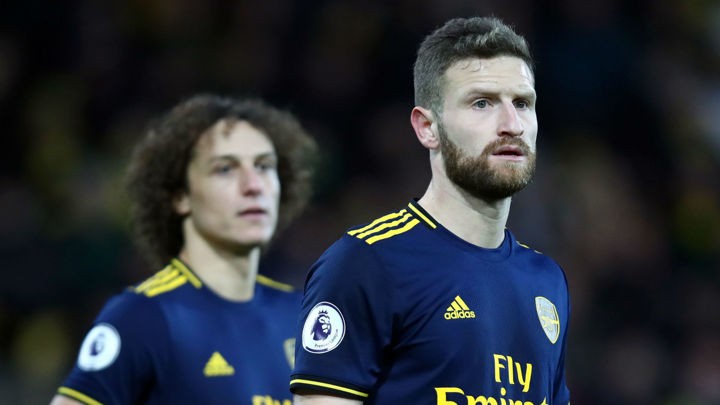 Martin Keown has expressed his belief that Arsenal centre-back David Luiz "has to go" this summer, while also insisting that Shkodran Mustafi "isn't quite at the level" required for the club either.

Luiz joined Arsenal from Chelsea in a surprise £8 million deadline day transfer back in August, and quickly became a fixture in the starting XI under Unai Emery.

The Brazilian retained his spot in the team when Mikel Arteta was drafted in to succeed Emery in December, but an erratic streak that has undermined his achievements over the years has been as prominent as ever.

Arsenal are having to face up to the decision on whether or not to take up their option to extend Luiz's current contract for another year, with a high salary likely to see the defender slip into free agency in the coming weeks.

Keown says the 33-year-old's departure may be necessary for his old club to start improving defensively, however, and that Mustafi could also be shown the exit door as Arteta sets about stamping his own mark on the squad.

The Arsenal legend told talkSPORT: “David Luiz concerns me because if you’re going to pay £8m for him and give him £5m wages and he’s only going to be there for one season, I’m not sure about the wisdom of that.

“Is he a proper defender? Can he play in a back four? His best defending came when he was in a back three at Chelsea when they won the Premier League [in 2016-17].

“It’s the most crucial area which he [Mikel Arteta] has to get right.

“Holding’s been injured, it’s hard to judge him, he probably deserves another opportunity. I think that Sokratis could be a useful defender but I can understand the uncertainty of giving David Luiz a new deal.

“Do they now start to be harsh and make those key decisions? If David Luiz isn’t the answer, then he has to go now.

“He doesn’t enjoy being in wide positions in the back four, he tends to bring people down and Mustafi, although Arteta has got a bit of a tune out of him, we know Mustafi isn’t quite at the level as well.

“You go to a football club, you have to make your mark and if it doesn’t happen you have to hold your hands up. I think both players will have to do that... I can’t see that being a long-term partnership in the Arsenal defence.”

Arsenal will have French defender William Saliba to call upon next season, but Keown went on to question the club's decision to send the 19-year-old back to Saint-Etienne on loan before the 2019-20 campaign.

He added: “There’s an awful lot of work to be done in there. There was the defender from Saint-Etienne, William Saliba, who they paid £27 million for but was loaned back again.

“I couldn't quite work that out because now I’m being told he’s world-class. Never mind if he’s world-class, if he was Premier League class it would have been good enough because that was an area of concern.”