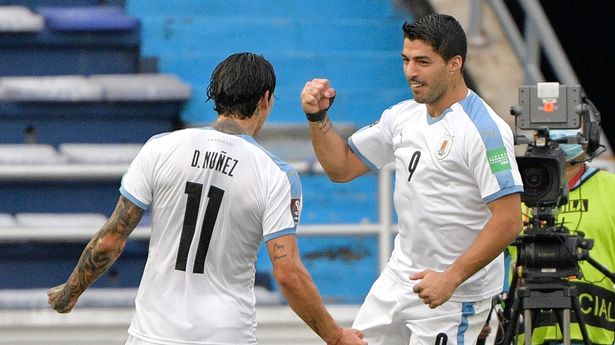 Former Barcelona star Luis Suarez is expected to play a new role in the Uruguay national team ahead of the 2022 World Cup.

Suarez has formed a good partnership with Liverpool's Darwin Nunez and both will likely start at the World Cup.

The South American side will face Ghana, Portugal and South Korea.

One of the main conclusions that this double date left for Uruguay is the good understanding that Luis Suárez and Darwin Núñez showed, which makes us presume that both will start the World Cup in Qatar as starters.

It is the attacking formula that Diego Alonso likes the most: he started playing with them in Asunción, when he made his debut and La Celeste played everything in that game.

They repeated it again in the transcendental game with Peru, the night in which the Uruguayan team got the ticket to the World Cup. And now they were the main attack duo with Iran and Canada.

Without the speed of before, nor with those starts that were scary due to their power, the Gunslinger understood perfectly what his role should be in this team: more as an assister than a finisher. And the one who should make the most of that fact is Darwin himself, as happened in the second goal against the Canadians.

Eye. This assisting facet of Suárez is not new: he already has 32 assists in Uruguay which, plus the 68 goals he has scored, add up to the participation in 100 goals in the national team, as stated in the note published by Ovación this Thursday. Crazy.

Nor is it that Suárez left the area, because on this double date he had goal situations and he looked good, both from a physical point of view and from a sporting point of view. If he continues adding minutes in Nacional he will arrive very well at the World Cup and will confirm that, in the end, it was a good decision to return to the tricolor.