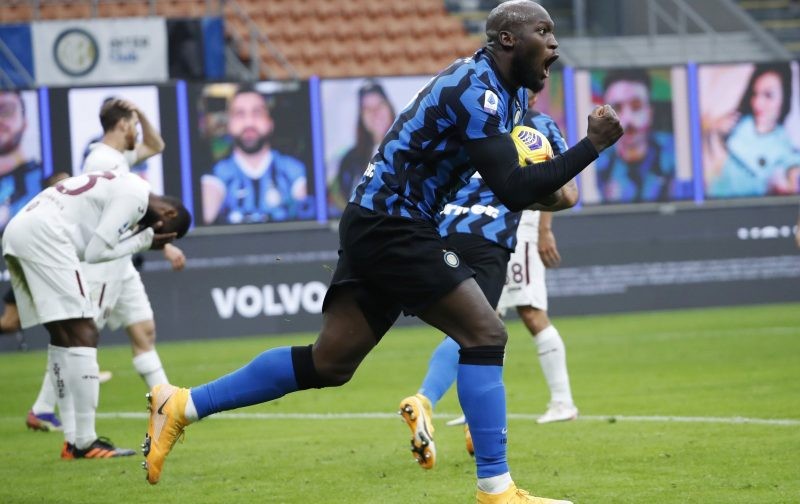 Inter came from two goals down to seal an incredible 4-2 win against Torino at the Stadio Giuseppe Meazza in Serie A on Sunday.

Trailing to Simone Zaza’s well-taken goal in first half stoppage time, the Nerazzurri found themselves further behind after Cristian Ansaldi neetted from the penalty spot shortly after the hour.

However, Inter reacted immediately to score twice in five minutes through Alexis Sanchez and Romelu Lukaku, before the latter netted from the spot late on to complete a stunning comeback. The turnaround was sealed in stoppage time through substitute Lautaro Martinez. Whilst Inter saw the bulk of the early possession, it was the visitors who enjoyed the best of the chances in the opening exchanges. Zaza had a half-volley deflected behind, and from the resulting corner Simone Verdi forced a low stop from Samir Handanovic.

Meanwhile, Zaza broke clear after a well-weighted Tomas Rincon through ball, but his strike was too close to Handanovic from inside the box.

At the other end, Chile internationals Sanchez and Arturo Vidal linked up to allow the latter to release Lukaku in the area, but Salvatore Sirigu matched the striker’s shot.

Lukaku was in again after a lofted Achraf Hakimi pass, but hesitated and could only move the ball on to Sanchez to fire against Bremer.

On the stroke of half time Zaza appeared to be clean through again as he latched onto Karol Linetty’s pass over the top and raced away from Danilo D’Ambrosio, but nudged the ball on with his arm to get away.

Deep into first half stoppages the Granata striker had his goal though and it came in some style. After pinching the ball from Sanchez, Torino broke and before Soualiho Meite unlocked the defence with a wonderful backheel for Zaza to rifle into the bottom corner.

Whilst Inter began the second period on the front foot, their play lacked intensity and Antonio Conte’s side were unable to test Sirigu.

A clumsy Zaza foul on Nicolo Barella gifted Inter a freekick on the edge of the box. However, before Sanchez could strike, play was called back to an attempted Ashley Young clearance in Inter’s box, with the Englishman catching Wilfried Singo in the chest.

Former Inter defender Ansaldi stepped up and thumped a vicious penalty beyond Handanovic to double the Granata’s advantage.

The hosts hit back immediately though and halved the deficit from kickoff. Vidal found Lukaku in the box and though his sliced effort hit the bar, Sanchez reacted quickest to tuck home in the middle of the ensuing crowd.

Inter suddenly burst into life and just moments after Lukaku had drilled against the post from a loose ball, the Belgian drew the Nerazzurri level. Martinez released Sanchez in the box and his cutback was tapped home on the line by Lukaku, as Inter fought back from two goals down.

They ought to have completed the turnaround soon after as Andrea Ranocchia had a free header at the back post, but the defender could only flick the ball wide.

With less than 10 minutes remaining, Inter went ahead for the first time as they were awarded a penalty. A VAR check saw Nicolas Nkoulou adjudged to have caught Hakimi with a stray boot, and Lukaku made no mistake from the spot.

Inter’s victory was completed in the dying minutes through Martinez, as he met Lukaku’s pass to tuck home on the break.