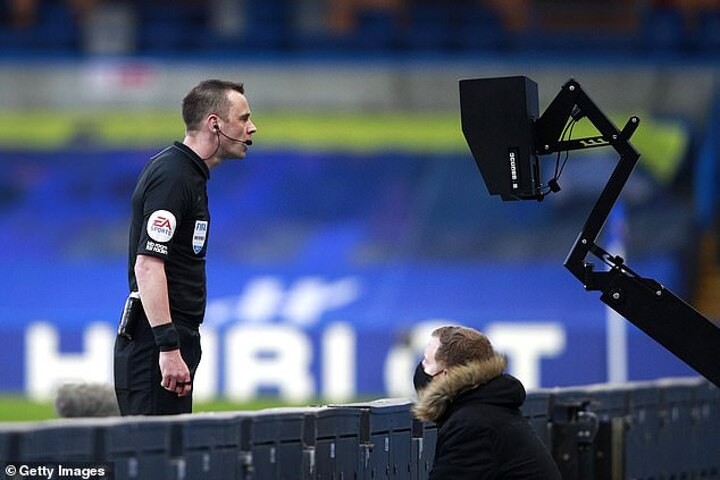 Luke Shaw claims referee Stuart Atwell told Harry Maguire that Manchester United should have been awarded a penalty during the clash with Chelsea, but that he was worried there would be 'a lot of talk' about his decision if he did so.

Attwell was asked to go and check the pitch-side monitor for a potential penalty after Callum Hudson-Odoi handled the ball inside the Chelsea box following a battle for possession with Mason Greenwood during the first half.

However, Atwell decided against awarding the penalty and allowed play to continue, before telling Maguire that the decision should have gone in United's favour.

Shaw was left confused by the referee's decision, claiming he has been told privately that the spot-kick should have been given.

He told Sky Sports after the game: 'At the time I saw a handball, I just carried on, didn’t know there was a potential check. I don’t know why they stopped it, if it’s not going be a pen.

'The ref told [Harry Maguire] "If I say it’s a pen there’s going to cause a lot of talk about it after."

'It’s confusing with this VAR, if it’s not going be a pen they may as well just carry on the game. I’m not going moan about it, I don’t think either team did enough to win.'

'But the referees are more bold and the handball laws are being changed in front of our eyes as the season goes along.

'There's no doubt earlier in the season that this would have been a penalty. Hudson-Odoi's panic is the fact that his arm shouldn't be there.'