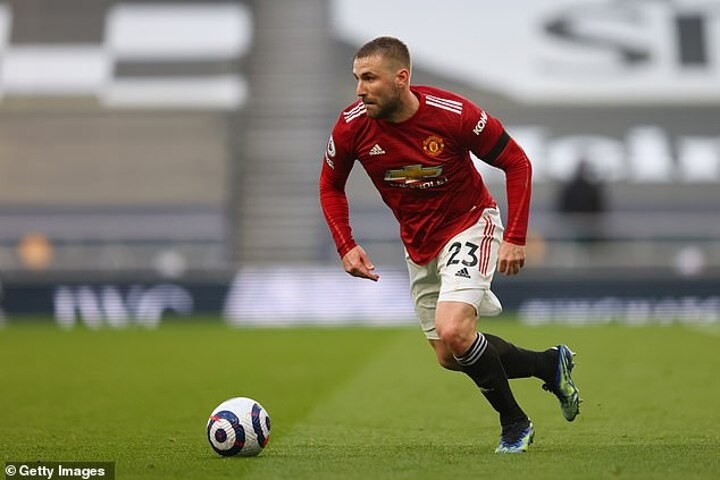 Luke Shaw has played with some stellar names during his football career and he has had the unenviable task of whittling those down for a dream five-a-side team.

In a Q&A for Manchester United's website, the left back was asked to compile his own side from the players he has played alongside.

'This is a very tough question. It's hard this,' he immediately acknowledged as he considered team-mates from Southampton, United and England.

Starting in goal, Shaw has the likes of Joe Hart (England), Dean Henderson, Sergio Romero and David de Gea (all Manchester United) to pick from and he chose the latter.

'For my keeper… [pauses]… this is tough because I've played with some very good keepers.

'I've played with Deano a little bit but not too much so I can't put him in, but he's a brilliant keeper.

'I think Joe Hart deserves a mention because he was an unbelievable keeper. When I was away with England and played with him I was really impressed with the way he was and the keeper he was, I thought he was absolutely top notch.

In defence the 25-year-old has played with the likes of John Stones, Gary Cahill (both England), Chris Smalling and Harry Maguire (both United and England) but none of those make the cut as the defender picks himself in a 1-2-1 formation.

'In defence [pauses] this is really hard! I've got to put myself in,' he laughs.

His choices in midfield appear a given straight away to himself as he picks Wayne Rooney and Paul Pogba without hesitation. This is despite the impact of talisman Bruno Fernandes since joining the Red Devils last year or playing alongside - albeit briefly - Steven Gerrard and Frank Lampard for England.

Despite classing Rooney as a midfielder, Shaw still has played alongside some high-profile strikers such as Harry Kane (England) and Robin van Persie (United).

However, those world-class duo are overlooked for Marcus Rashford who gets the nod due to their understanding on the pitch together at Old Trafford.