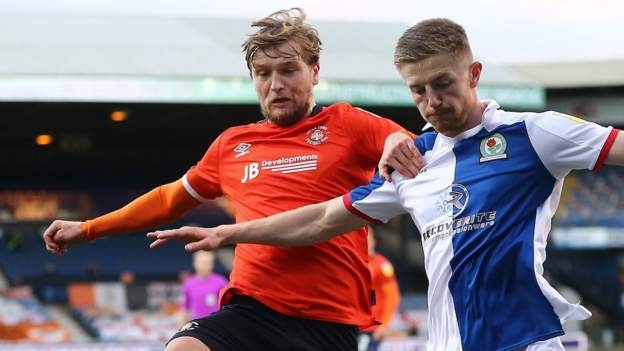 Luke Berry's goal was his second of the season for Luton

Blackburn substitute Sam Gallagher netted just five minutes after coming on to earn Tony Mowbray's side a point against Luton.

The Hatters, who have now failed to win in four games at Kenilworth Road, went ahead when Luke Berry stabbed home from close range midway through the second half.

But Gallagher pulled Rovers level three minutes later, pouncing on a Barry Douglas knockdown to fire in his second goal of the season.

Both sides had opportunities to win it, with Luton goalkeeper Simon Sluga producing a late double save to make sure of the draw.

Barry Douglas (Blackburn Rovers) wins a free kick in the defensive half.

Ben Brereton (Blackburn Rovers) has gone down, but the referee deems it simulation.

Attempt missed. Bradley Johnson (Blackburn Rovers) header from the centre of the box misses to the left. Assisted by Joe Rothwell.

Attempt saved. Sam Gallagher (Blackburn Rovers) left footed shot from the right side of the box is saved in the centre of the goal. Assisted by Adam Armstrong.

Attempt saved. Harvey Elliott (Blackburn Rovers) left footed shot from outside the box is saved in the centre of the goal.

Attempt blocked. Ben Brereton (Blackburn Rovers) right footed shot from the left side of the box is blocked. Assisted by Barry Douglas.

Glen Rea (Luton Town) wins a free kick in the defensive half.