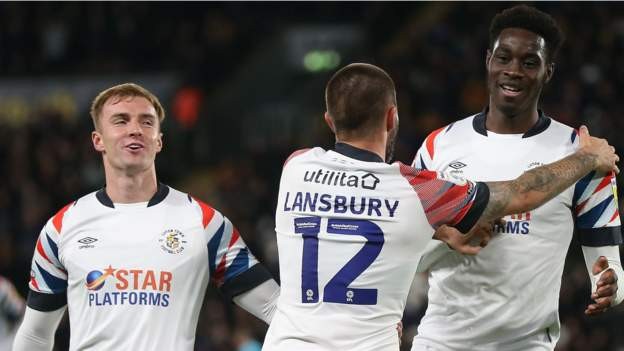 Andy Dawson was named interim head coach and took charge of the team but they conceded within six minutes through Alfie Jones' own goal.

Regan Slater hit the bar for the hosts as they pressed for an equaliser, but Henri Lansbury struck low from distance for Luton's second before the break.

Hull offered little in response in the second half, as Luton closed out the victory and moved up to fifth in the table.

Arveladze had been appointed in January as replacement for Grant McCann and guided the Tigers to safety and a 19th-place finish in the Championship last season.

Prior to his sacking, Hull had been on a run of four successive defeats under the Georgian and were 20th in the table with just three wins from 10 games coming into Luton's visit to MKM Stadium.

Dawson made three changes to the side that were defeated 3-0 by Swansea on 17 September, but they endured the worst possible start as Jones turned into his own net after Elijah Adebayo hit the bar.

Despite growing into the game after conceding, Hull went in at the break 2-0 down after Lansbury's sensational strike from well outside the box.

There was to be no comeback for Hull, however, as Luton defended well in a routine second-half performance to protect their lead.

"I found out this morning. I spoke to Shota and he was honest and open. We send him and Peter van der Veen our regards, they're two fantastic people.

"We prepared through the international break. Us and the lads worked hard, they looked fit and strong and prepared to go into the game tonight and then that came about this morning. But that's football. Nothing really surprises you and you have to adapt quickly.

"The team was a bit of everything. It was conversations over the past few days and this morning. The lads thought a lot of the gaffer and Peter so it was about preparing them to get them in the right state of mind.

"I thought we were a bit loose on the first goal. After that, to a man, they were brave out of possession and on getting the ball. They kept going to the end. In the final third we could have had some more inventiveness but that's something we can work on."

"It was an excellent performance. It was a trickier game than it looked as they changed manager, which can have an uplift, but we had to concentrate on ourselves, which I thought we did fantastically.

"Once we got to grips with the press, we smothered them, and we should have been more than 2-0 up at half-time.

"The onus isn't on us at 2-0. We always believe we've got goals in us. Once we put the level of performance in in the first half, in the second half it was about trying to go out in the final third but if you can't you need to defend well, which I thought we did."

Jean Michaël Seri (Hull City) wins a free kick in the attacking half.

Greg Docherty (Hull City) wins a free kick in the defensive half.

Attempt blocked. Elijah Adebayo (Luton Town) right footed shot from the left side of the box is blocked. Assisted by Gabriel Osho.

Attempt missed. Alfie Jones (Hull City) right footed shot from the centre of the box misses to the left. Assisted by Regan Slater with a cross following a corner.

Attempt missed. Cyrus Christie (Hull City) left footed shot from outside the box is just a bit too high.

Attempt blocked. Jordan Clark (Luton Town) left footed shot from the left side of the box is blocked.