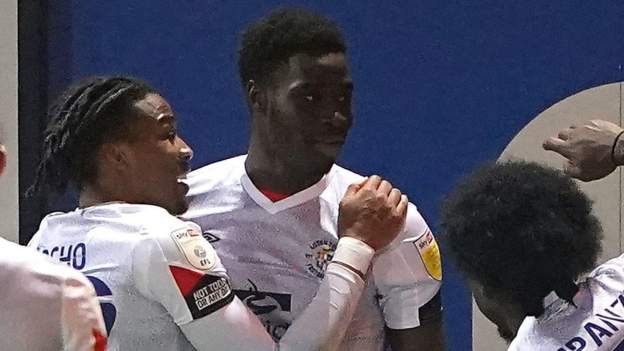 Luton Town moved up to 10th in the Championship after beating Bristol City at Kenilworth Road to earn their fourth win in six league games.

Despite being the better side in the first half, Bristol City failed to create many clear-cut chances and were made to pay when Tom Lockyer headed home shortly before half-time to give Luton the lead.

Andreas Weimann levelled 11 minutes after the break as he calmly finished after great work by Antoine Semenyo.

But Luton's top-scorer Elijah Adebayo bundled in the winner after rising highest from James Bree's free-kick.

The Robins failed to win away for the seventh successive time and remain in 16th place.

City looked good for much of the first period as they had the better of the possession, but a Chris Martin header over the bar was the sum of their attacking efforts.

Luton had not registered a shot on target until Lockyer's goal - his first for the Hatters since joining from Charlton in September 2020 - after Bree swung in a cross after a short corner routine.

The Hatters started the second half brightly, but it was City that struck next as Semenyo superbly set up Weimann after controlling a high ball midway in the Luton half, drawing the defenders and playing an excellent pass with the outside of his foot to release the Austrian.

City should have gone in front four minutes later when Cameron Pring forced a superb save from James Shea from the edge of the box before Bree claimed his second assist as Adebayo scored his 12th of the season.

Substitute Nahki Wells could have earned at least a point for the visitors with two late efforts but he missed the target on both occasions.

The second chance came in stoppage time when Weimann headed across the face of goal but the Bermuda forward could only divert the ball into the side netting.

Alex Scott (Bristol City) wins a free kick in the defensive half.

Kal Naismith (Luton Town) wins a free kick in the defensive half.

James Bree (Luton Town) wins a free kick in the attacking half.

Attempt missed. Nahki Wells (Bristol City) right footed shot from the centre of the box misses to the left. Assisted by Cameron Pring following a corner.

Attempt blocked. Zak Vyner (Bristol City) header from the centre of the box is blocked. Assisted by Alex Scott with a cross.

Attempt missed. Andreas Weimann (Bristol City) left footed shot from the centre of the box is just a bit too high. Assisted by Chris Martin with a headed pass.

Tom Lockyer (Luton Town) wins a free kick in the defensive half.