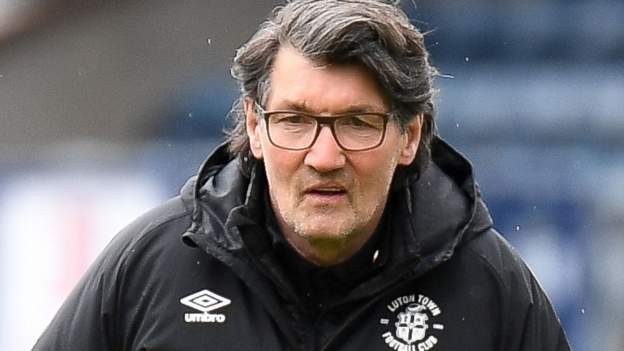 The ex-Hatters and Wimbledon striker, 62, was diagnosed in December and will soon step away from his club duties.

As a player Harford was renowned for his competitive streak and says he will channel that spirit once again.

Harford told BBC Three Counties Radio: "This is the biggest fight - mentally this is really tough, as everyone knows this is a real tough gig."

The twice-capped England international has begun a three-year course of medication though the cancerous tumour has spread into his hip and lymph nodes.

He has received many messages of support including from former Manchester United manager Sir Alex Ferguson.

"You think you're invincible sometimes as a sportsman and think you'll never be affected by it, but we are vulnerable to this disease," Harford added.

"When you get diagnosed it's a massive body blow, your whole life comes to a halt.

"As soon as I found out I had this condition I changed my diet and lifestyle, started losing a bit of weight and doing some exercise."

Raising awareness and helping others

Harford had kept his diagnosis quiet for seven months, continuing in his job at Luton, but decided now was the time to "let people know".

"I obviously want to get better and getting cancer is not very nice, but the main thing is to encourage people to go and get tested, to make people aware of the disease and that anyone can get it.

"Firstly I started thinking about the Luton Town fans - if I can help any of them then I'll be delighted.

"But if I can help anyone, anywhere, that is the main reason why we decided, as a football club, to put it out there and make people aware of it."