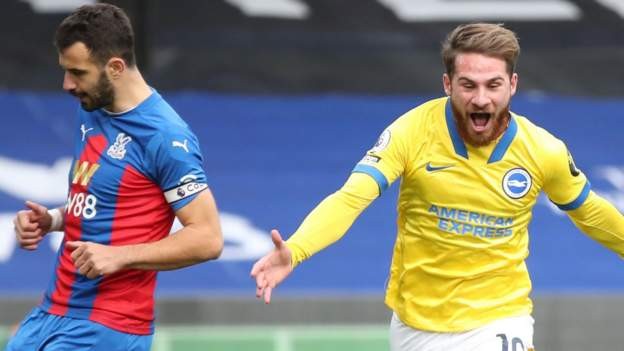 Wilfried Zaha scored his fourth goal of the season

Argentine Mac Allister latched on fellow substitute Aaron Connolly's lay-off to drill home a rasping first-time finish from the edge of the area.

Palace were on the back foot for long periods, but looked like holding on for victory - having taken a 10th-minute lead courtesy of Wilfried Zaha's penalty, which turned out to be the home side's only shot on target.

The spot-kick was rather harshly awarded as Tariq Lamptey was judged to have dragged down Michy Batshuayi in the box, but replays showed there was little contact on the Palace striker.

Brighton pushed for a winner in 10 minutes of injury time but in captain Lewis Dunk's desperation to pounce on a loose ball, he caught Gary Cahill with a stud-high challenge and was sent off.

The draw moves Palace up a place to 12th, while Brighton stay 16th in the table.

They defended resolutely for 89 minutes and looked like coming away with a smash-and-grab victory thanks to Zaha's penalty - but have now kept just one clean sheet in their past 13 games.

Hodgson will have been impressed by the performance of holding midfielder Jairo Riedewald, given a first start at Selhurst Park since January.

The Dutchman has struggled to show his best form since joining Palace from Ajax in 2017, but was much improved in this contest.

Deployed in front of the backline, Riedewald won possession eight times, more than any other player on the pitch, and misplaced just one of his 23 passes.

And it was his delightfully threaded through ball that led to Batshuayi thundering a finish into the roof of the net, but it was disallowed by a marginal offside decision.

Otherwise, though, Palace's lack of attacking intent meant they had to settle for a point.

Seagulls break down the Eagles… eventually

Brighton had more possession (65%), made more passes (539) and had more shots (20) at goal than their opponents, so will have mixed emotions after the game - delighted at salvaging a draw but aggrieved at not having scored more.

Graham Potter's side play attractive football, their passing is neat and crisp but attacks fall apart too often in the final third or they fail to work the goalkeeper.

Just three shots were on target, with Mac Allister's goal punishing Joel Ward's clearance, but the other two efforts from Neal Maupay were comfortable for Palace goalkeeper Vicente Guaita to deal with.

The Seagulls finished 15th last season, seven points clear of the relegation zone, and they may be looking over their shoulders again if finishing and results do not improve.

Brighton have won just one of their opening five matches this season and will have to make do without captain Dunk for three games after he received a straight red card for a horrible challenge on Cahill.

Attempt blocked. Neal Maupay (Brighton and Hove Albion) right footed shot from the centre of the box is blocked. Assisted by Tariq Lamptey with a cross.

Tariq Lamptey (Brighton and Hove Albion) wins a free kick in the defensive half.

Gary Cahill (Crystal Palace) wins a free kick in the defensive half.

Attempt blocked. Lewis Dunk (Brighton and Hove Albion) header from the centre of the box is blocked. Assisted by Pascal Groß with a cross.

Yves Bissouma (Brighton and Hove Albion) wins a free kick in the attacking half.

James McArthur (Crystal Palace) is shown the yellow card for a bad foul.

Adam Webster (Brighton and Hove Albion) wins a free kick in the defensive half.