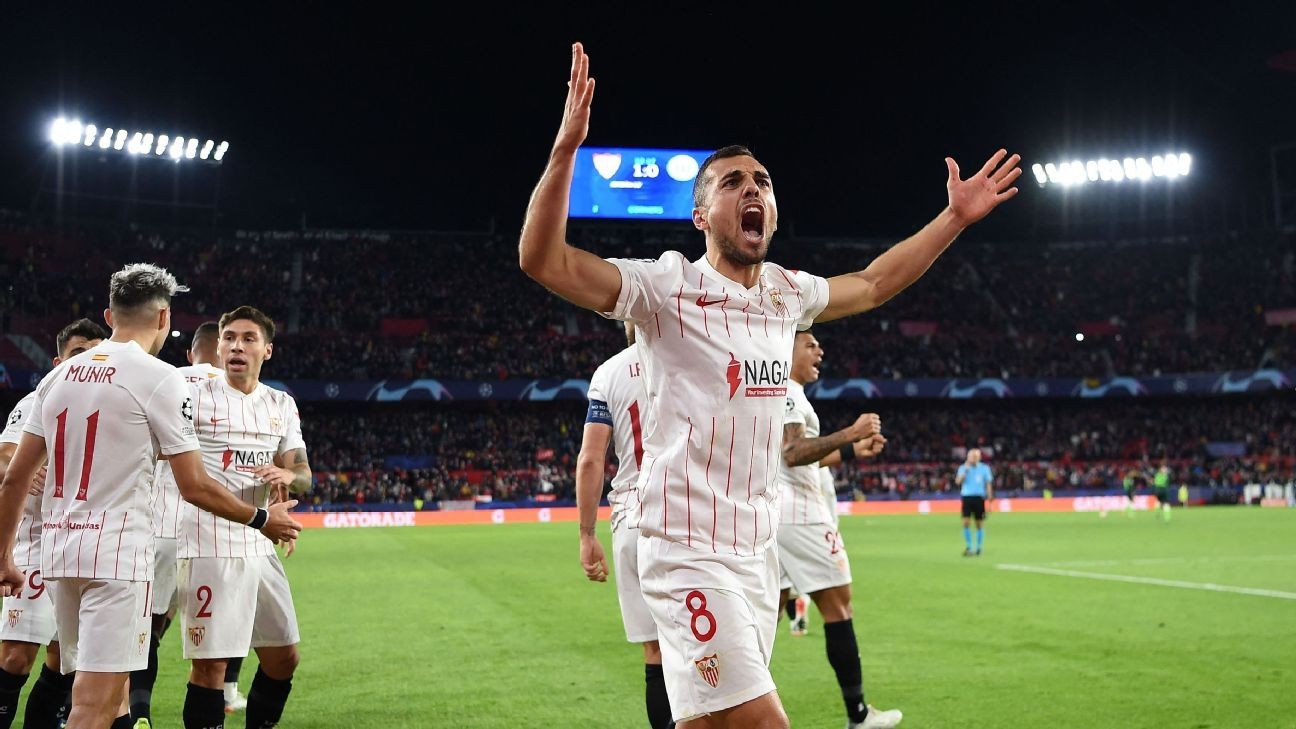 It hasn't been a good week for Spanish football in the Champions League. Barcelona drew 0-0 with Benfica. Villarreal and Manchester United did what Villarreal and Manchester United do, and so did Cristiano Ronaldo: a late(ish) goal opening the way to a 2-0 away win at the Ceramica, which allows Michael Carrick to step down as interim manager to the interim manager with a 100% record. And Atletico Madrid conceded an 87th-minute goal to lose against Milan, just about the time when they decided that what they had to do was just not lose.

Of the five La Liga teams in the Champions League, only two won this week: the two that might have been distracted and that meet this weekend. Not Barcelona and Villareal, who play at the Ceramica on Saturday night (although that's a tasty match-up), but the sides who meet at the Santiago Bernabeu 24 hours later: first-place Real Madrid, who defeated Sheriff 3-0, against third-place Sevilla. And while Sevilla won 2-0 against Wolfsburg -- they had to, as victory was not entirely secure until the 97th minute -- it's not over yet. Julen Lopetegui's team, whose group didn't look that difficult but in which they have won only a single game, still need to go to Salzburg and win on the final match day.

Look at the list. It's not only Sevilla who have to get a result away -- they all do. Barcelona have to beat Bayern Munich. Atletico have to beat Porto and hope that AC Milan don't win against Liverpool. Villarreal need to avoid defeat away at Atalanta. All of which asks a question, even if it's one not asked with the insistence you might expect: what's wrong with them?

It's been asked before. Type "why do Spanish teams fail in the Champions League," and you'll get responses from plenty of years before. On one level, it is no surprise -- instead, it's overdue. As the line goes: it's the economy, stupid.

And then there are the specifics: Villarreal, unlucky against Manchester United again, entirely dominant for an hour or more, might be accused of reading the game wrong. Atletico, certainly might -- the subs don't work, they just make it worse -- but ultimately their campaign just hasn't been good at all and they are in a difficult group, justice done when the "Messias" (well, Junior Messias) appeared before Milan.

Barcelona are, well, Barcelona -- and there was actually some hope in a result that leaves them on the verge of elimination because this time they played well against Benfica, a glimpse of something good under Xavi Hernandez.

Sevilla, meanwhile, are... it's not really clear what Sevilla are. Their manager has said they were "equal to the task." Which, mostly they have been, all season. But there's something about them that's hard to put your finger on, a feeling that something is missing, that they're really good, but not that good. Reliable, strong and organised -- much like the teams (Lille, FC Salzburg, Wolfsburg) in their Champions League group, which might be part of the explanation -- but, what exactly? This season felt like an opportunity, domestically at least, and the fact that Sevilla's sporting director, Monchi, said a few weeks ago that they would be ambitious in the winter window suggests that they still think so.

They're third, they've been beaten once all season, and they have won four and drawn two in their last six. Ivan Rakitic is playing well, and the central defenders understand each other with just a look, Diego Carlos says. Sevilla are only two points off the top, but if they are going to compete for the title -- really compete for it -- they probably have to beat Madrid on Sunday in what feels like the first game likely to shape the season (yes, even coming after the clasico). They need the win as much to tell themselves they can as anything else, to avoid that feeling of yes we can, but -- the feeling that when it comes to the biggest opponents, it won't happen.

Madrid shot the Sheriff, but they did not shoot Lo-petegui -- sorry, that's all kind of wrong, not least because, famously, Real Madrid did fire Lopetegui, in 2018. And this weekend they face his Sevilla side again -- one that is without Youssef En-Nesyri, Jesus Navas, and might even be missing Diego Carlos, Jules Kounde and Marcos Acuna. A home victory, even this early, even though it's only one week since Madrid went top, feels like it would leave Madrid as clear favourite, a team starting to find their feet -- finding their team, in fact. If everyone is fit, 10 of the starting 11 feel clear now -- Marco Asensio or Rodrygo might be the only doubt -- and there's something building.

Even if, this week in Transnistria, you wondered if it was really necessary, Carlo Ancelotti explained afterwards why Karim Benzema, Luka Modric, Toni Kroos, Vinicius Jr. and Casemiro all played 90 minutes for Real Madrid. It wasn't because they are the best or irreplaceable, even though they are. Quietly, Ancelotti has put the pieces back together, starting his second spell by being, in Dani Carvajal's words, much more aggressive about defensive duties than before. He is calling for "pessimistic" defenders, alert to the worst-case scenario, and found in David Alaba not just a replacement for Sergio Ramos, but an upgrade.

It's hard to avoid the feeling that if you strip it down to basics and reduce it to talent, no one else has a player as good as Benzema or Kroos or Modric. Or maybe even Vinicius -- Ancelotti has given him confidence others didn't, but he says he's done nothing except play him. With Kroos and Modric the discourse is similar: the best thing you can do with them, he insists, is nothing. Just let them play because they know best. "Relax, I'm not going to interfere," he said at the weekend. "When Kroos is like this, the coach is calmer," he said on Wednesday.

The doubt might be how much of the season they and the others are available for, since age and injury are not on their side. Indeed, it's unclear how often can Madrid's best XI can play, and how much Madrid really have in reserve.

Real Madrid and Carlo Ancelotti may be the only hope for Spanish football in the UEFA Champions League thanks to their superior talent. David S. Bustamante/Soccrates/Getty Images

Another lingering question is whether this recent purple patch is about who Real Madrid have played against, or whether it's something more lasting. Sunday starts a run in which they play every three days until Christmas, which looks like this: Sevilla, Athletic, Real Sociedad, Athletic again. Oh, and Inter Milan in the middle of it. Time to see what they're really made of -- it's getting serious.

For some, "serious" has already arrived for Spanish teams. Critical, in fact. And it's possibly even too late. This weekend, domestic football takes over again, but Europe lingers and this time there is no way back: defeat is the end. Except that it's not; except that there's light out there still. While none are out, all four could end up with the Europa League, along with Betis and Real Sociedad (although they too need a final day win to not drop into the Conference League).

And, you know what, that's no bad thing -- not having got to this point. Six teams in a mini-Spanish league that some consider beneath them -- certainly in Barcelona's case -- when they shouldn't. Six teams in a mini-Spanish league all of them will think they could win -- or would have done if they weren't all in it together -- and a competition three of them have won in the last four years alone.

Unai Emery back in the Unai Emery cup. Xavi Hernandez, like Johan Cruyff, trying to win a first European competition away from the European Cup. Sevilla chasing the trophy that they say made them, the one they have won more than anyone else, ever. And the competition whose final they're only going ahead and hosting.