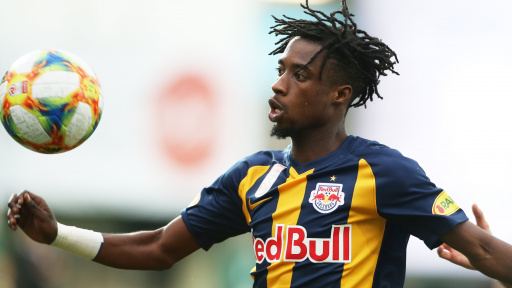 Midfielder Majeed Ashimeru says ‘it won’t be a bad idea’ to end his career in the Ghana Premier League with giants Hearts of Oak.

Inspired by Asamoah Gyan’s return to the domestic league, the Red Bull Salzburg midfielder insists at the end of his career in Europe, he will be returning to Ghana to play before hanging his boots.

Although he started his career in the Ghana Premier League with WAFA and was part of the famous WAFA team that thrashed Hearts of Oak 5-0 in Sogakope four years ago, Ashimeru has always been a fan of the Phobians.

“I think now our senior Asamoah Gyan is also playing in the Ghana Premier League, so maybe in the future when we are done plying our trade in Europe, we can come home and support the younger ones,” he said on Citi TV’s The Tracker Show.

“So for me, it won’t be bad after my career, to come back to Ghana and play in the local league.”