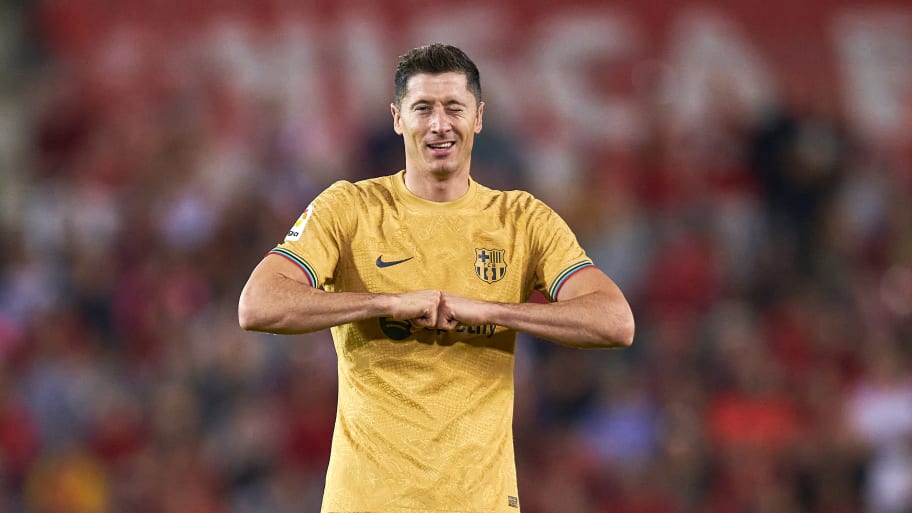 Mallorca fell to a narrow 1-0 defeat at home to Barcelona which sent the visitors to the top of La Liga's table on Saturday evening.

“Oh my God," Mallorca's manager Javier Aguirre gushed pre-game. "I’ve seen him on TV. It’s a good signing for the league." Well, the arrival of Robert Lewandowski is certainly a plus for one particular La Liga side - and it wasn't Mallorca as the prolific Pole proved the difference.

The defensively stubborn hosts regularly sunk into a compact 5-4-1 off the ball, desperately trying to limit any space between the lines when Barcelona sauntered over halfway.

Barcelona patiently prodded and probed but were rebuffed during 20 minutes encouraging minutes for Aguirre's side. And then Lewandowski got the ball.

Luring Martin Valjent out of the back-three with his wandering, Lewandowski snuck into the box to collect Ansu Fati's pass. The slippery number nine chopped onto his right foot with a stamp which sent a spray of surface water into the air. By the time the droplets landed, the ball was rustling Predrag Rajkovic's net. Wide of the left-hand edge of the six-yard box, Lewandowski arrowed a vicious effort inside the far post.

The visitors predictably dominated possession but it was a much more even contest in terms of chances - in fact, the hosts had more shots than their illustrious visitors. Mallorca counter-attacked eagerly through their wingbacks and threatened from set-pieces.

Antonio Sanchez provided a piercing presence bursting forward from midfield. In the first half, his low cross picked out Mallorca's left wingback Jaume Costa. Having drifted into the middle of Barcelona's box, escaping the attention of Alejandro Balde to meet Antonio Sanchez's low cross, Costa's side-footed effort from seven yards out struck Marc-Andre ter Stegen square in the chest.

After the break, Sanchez forced Ter Stegen into another tip-away with a shot himself, darting behind Gavi and into the penalty box.

With an advantage to cling to, Barcelona favoured control over another goal, dialling back the tempo in a bid to quell Mallorca's threat.

However, a flurry of turnovers from the Catalans gave Mallorca a flicker of hope during the closing stages, conspiring to conjure a nervy conclusion for the gold-clad visitors. Nevertheless, Barcelona held onto their slender lead, ensuring Xavi remains unbeaten in his first 18 matches away from home as a La Liga manager - breaking Zinedine Zidane's record with Real Madrid.

GK: Marc-Andre ter Stegen - 6/10 - A bit fortuitous to see Costa's close-range effort fired straight at him but managed to avoid spilling the ball to an opponent.

RB: Alejandro Balde - 6/10 - Starting on his unnatural flank, Balde's blistering pace bailed him out of some potentially sticky situations.

CB: Andreas Christensen - 5/10 - Rarely took full advantage of the space he was given to carry the ball into.

CM: Franck Kessie - 5/10 - Aggressively pushing forward, the advanced midfielder was often the closest player to Lewandowski but rarely linked with the goalscorer.

CM: Sergio Busquets - 7/10 - Blessed with a perennial pocket of space to receive a short pass and fire off another one, knitting together Barcelona's buildup.

CM: Gavi - 5/10 - Enthusiastically threw his tiny frame around the pitch with infectious but indisciplined enthusiasm.

RW: Ousmane Dembele - 5/10 - Skirted around the fringes of the contest.

ST: Robert Lewandowski - 8/10 - The "killer" - as Aguirre dubbed him - emphatically lived up to his pre-game billing.

LW: Ansu Fati - 7/10 - On his first La Liga start in 11 months, Fati jinked away from Pablo Maffeo to assist Lewandowski's opener - though the Pole still had a lot to do.

Manager: Xavi Hernandez - 5/10 - While it was another win and a clean sheet, Xavi could hardly take much credit for Lewandowski's moment of inspiration as Barcelona scarcely threatened elsewhere.

Player of the Match - Robert Lewandowski

This article was originally published on 90min as Mallorca 0-1 Barcelona: Player ratings as Robert Lewandowski fires Blaugrana top of the table.