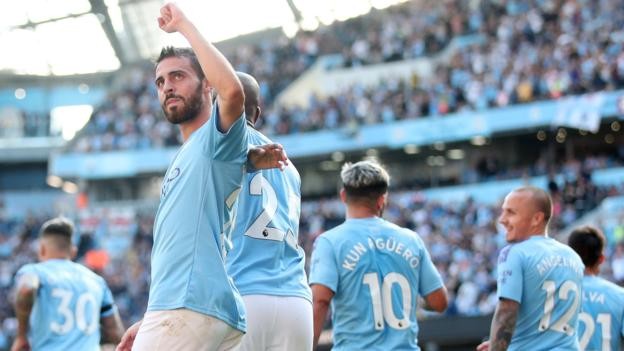 Even by Manchester City's standards, Saturday was quite a statement.

At the start of the week, the defending champions were supposedly in crisis - falling five points behind Liverpool after the shock of being beaten at Norwich, then losing one of their two remaining fit senior centre-halves to injury.

It was only one defeat but suddenly there were major doubts about City's defending and, with it, their prospects this season were supposedly fading fast.

For some observers, it was easy to see what had gone wrong - they should have replaced Vincent Kompany, they would not cope without Aymeric Laporte and now John Stones too, and, even in mid-September, they had already conceded too much ground in a title race where even the smallest margins matter.

At least, that is how the discussions went. Typically, Pep Guardiola's side reacted by silencing their critics, and in emphatic style.

Wednesday's 3-0 away Champions League win over Shakhtar Donetsk was an impressive start, in what was City's toughest fixture in Group C.

Watford were next. But while the visit of the bottom-of-the-table Hornets on Saturday was expected to be straightforward enough, nobody anticipated the total destruction that followed.

Even Guardiola, who is notoriously hard to please, admitted his side were a "joy to watch" in their 8-0 victory, their biggest in the league in his time at City.

There are tougher tests to come, of course, but this was exactly the response he was looking for - and a message to Liverpool too.

The Reds can restore their advantage at the top by beating Chelsea at Stamford Bridge on Sunday, but they will go into that game knowing City are back at their best, and on their tail again.

'The important thing is how we react'

Man City 8-0 Watford: Champions 'proved' something to themselves - Pep Guardiola

We have seen before that City know how to deal with defeats, no matter how rarely they happen.

After their only previous Premier League loss in 2019, against Newcastle on 29 January, they responded by winning all 15 of their remaining league games to clinch the title.

That run demonstrated City's resolve and mental strength - this week has just been another example.

"Opponents always deserve respect. The same feeling I have now, I had after Norwich, so it was not a bad performance last week.

"We can lose the games, but the important thing is the approach and how we react."

City play with a point to prove

Right from the start on a sunny afternoon at Etihad Stadium, City played like they had a point to prove.

Watford boss Quique Sanchez Flores neatly summed up his side's painful afternoon afterwards, saying "after 30 seconds we realised it would be tough, after 10 minutes really difficult and after 50 minutes it was impossible".

Some City fans were not in the stadium by the time David Silva slid his side ahead inside the first minute, and with five goals to celebrate, none of them were ever in their seats for long in the first 18 minutes of the match.

"It is not normal to score five goals with five shots like we did," Guardiola said afterwards. "But the quality of the players up front made a difference."

They certainly did. Even without Raheem Sterling, who was rested and left on the bench after previously playing every minute of the season, City were in unstoppable mood.

With Kevin de Bruyne pulling the strings, Bernardo Silva and David Silva turning on the style and Sergio Aguero finding space behind the Watford defence, more chances and goals followed.

In truth, City should have ended up with more than eight given the barrage they launched on the Watford goal - it was easy to lose count of the opportunities they spurned, but Aguero missed the target when clean through and hit the post with a header, while Riyad Mahrez also nodded against the woodwork.

Even so, it was a sign of the appetite of this City side that they were pushing forward for more goals in the final minutes, apparently without knowing that they were close to the Premier League record win, Manchester United's 9-0 demolition of Ipswich in 1995.

Guardiola was seemingly unaware of it afterwards, saying: "I didn't know the record. Who is it? They deserve it, congratulations."

Positives at the back for City too

As formidable as City's attack was, they were far from flawless at the back, the way Gerard Deulofeu danced past Nicolas Otamendi to force a fine save from Ederson with the score at 1-0 being a case in point.

But there were still positives to take from their defensive display, and not just because they emerged with another clean sheet.

Guardiola gave more game-time to Otamendi and Fernandinho together, his first-choice pairing at the back for the foreseeable future, and was able to bring highly rated teenage defender Eric Garcia off the bench for his Premier League debut too.

The 18-year-old Spaniard replaced Otamendi for the final 30 minutes, will start against Preston in the Carabao Cup on Tuesday night, and looks set to play a bigger role in the coming weeks, whether City get more injuries or not.

He seems to have impressed his manager, even before he stepped on to the pitch.

"Eric is so clever," Guardiola said afterwards. "I did not know before the game whether Watford would play four or five at the back, but he came and told me after the warm-up that they had made movements with a four.

"He was the guy who was looking at the opponent and paid incredible attention. He played well and with the problems we have at the back, he is going to play a lot of minutes because I trust him a lot."