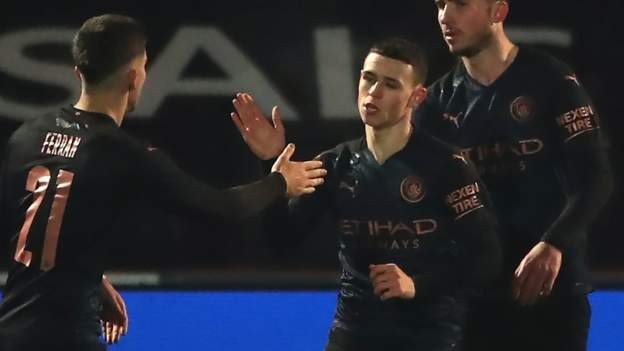 Cheltenham Town came within nine minutes of one of the biggest shocks in recent FA Cup history before Manchester City staged a dramatic late rally to crush the dreams of the gallant League Two side.

The Robins, 72 places below City who lie second in the Premier League, threatened huge embarrassment for Pep Guardiola's side after Alfie May put Cheltenham ahead on the hour after a trademark long throw from captain Ben Tozer caused chaos in the area.

City, who made ten changes to the team that beat Aston Villa in the Premier League on Wednesday, spared their embarrassment when Phil Foden, the game's outstanding player, arrived at the far post to turn in substitute Joao Cancelo's long cross in the 81st minute.

And the turnaround was complete three minutes later when a rare moment of slackness in the outstanding Cheltenham defence, with goalkeeper Josh Griffiths superb, switched off and Gabriel Jesus scored from Fernandinho's delivery.

Ferran Torres scored Manchester City's third with the last kick of the game to give the scoreline a cruel reflection on Cheltenham's heroic efforts.

It was so cruel on manager Michael Duff and his players, who now go back the battle for promotion from League Two, while City will be away at Swansea in the fifth round.

The sight of Manchester City manager Guardiola disputing where Cheltenham could take a throw-in said everything about the way the League Two underdogs gave their mighty opponents a serious fright.

Tozer's throw-ins were causing all manner of problems and led to Cheltenham's goal but there was so much more to their performance than that set-piece weapon, a threat any manager in the game would utilise.

Cheltenham tried to play football when they got the chance, with goalscorer May, who has done the hard yards in non-league before playing for Doncaster and now Cheltenham, a leading light.

Robins keeper Griffiths, who suffered the ignominy of being beaten from 71 yards by his Newport County opposite number Tom King in midweek, was in defiant form as he saved well from Riyad Mahrez and Torres, showing command throughout. Tozer's headed goalline clearance from Benjamin Mendy in the first half was also symbolic of their 'they shall not pass' approach.

There may have been no fans inside this compact stadium but there was still a real sense of occasion, the game being halted in the first half because of a firework display nearby.

In the end this will be a bitter disappointment to Cheltenham but they can be rightly proud and take huge confidence into their League Two promotion battle.

Eric García (Manchester City) wins a free kick in the defensive half.

Foul by Alfie May (Cheltenham Town).

Attempt missed. Matty Blair (Cheltenham Town) right footed shot from the right side of the box is too high following a corner.

Goal! Cheltenham Town 1, Manchester City 1. Phil Foden (Manchester City) left footed shot from the left side of the six yard box to the top left corner. Assisted by João Cancelo with a cross.

Phil Foden (Manchester City) wins a free kick in the attacking half.

Attempt missed. Phil Foden (Manchester City) header from the centre of the box is too high. Assisted by João Cancelo with a cross.

Foul by Alfie May (Cheltenham Town).

Barack Obama's A Promised Land: Hear from the former US president as he reflects on his time in officeBBC Food: How can you eat well for £1 a portion?