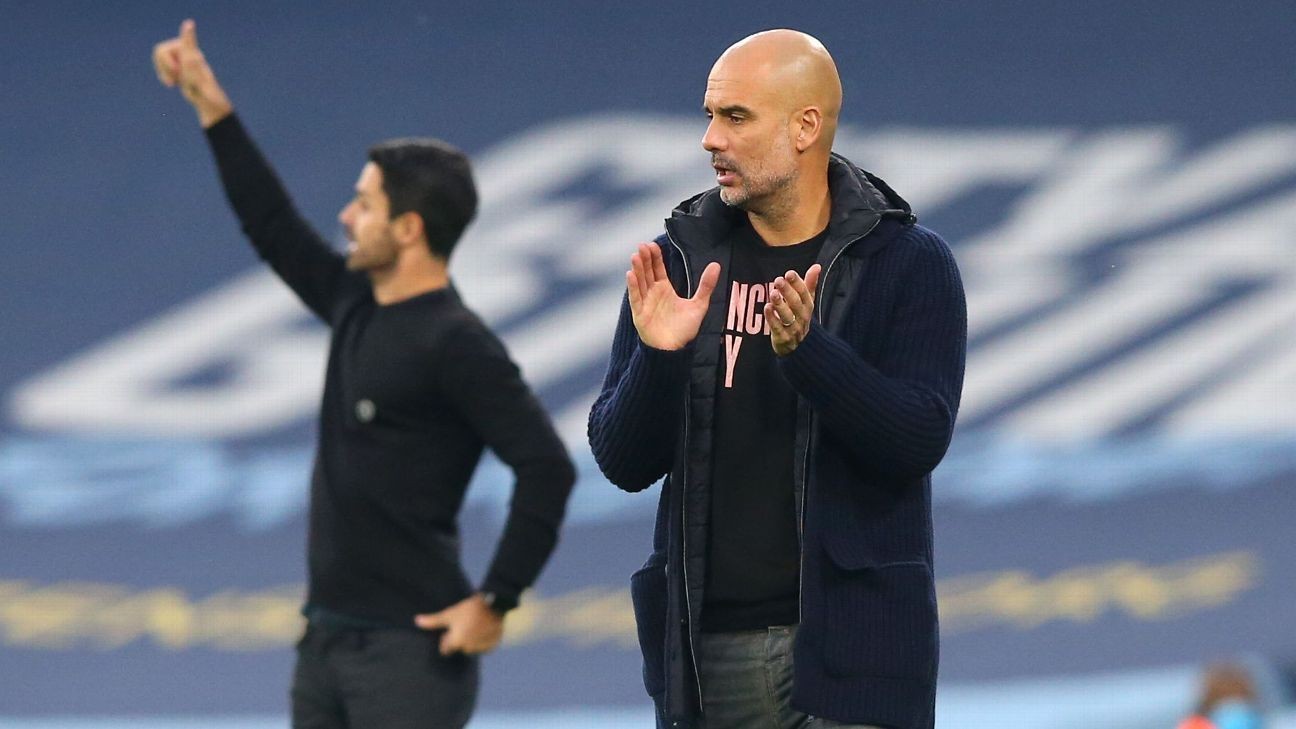 MANCHESTER, England -- Pep Guardiola predicted this week that, after a start to the season filled with freak results, normal service would resume in the Premier League. For 90 minutes at the Etihad Stadium on Saturday evening, he was proved right as his Manchester City team beat Arsenal 1-0 thanks to a goal from Raheem Sterling.

City avoided a third straight league game without victory, while not even a campaign that has already seen Aston Villa beat Liverpool 7-2 and Tottenham score six at Manchester United could conjure an away win for Arsenal against a top-six side.

The Gunners have made significant progress under Mikel Arteta, but it is 29 games since a 2-0 win at City in January 2015. The must change to have title ambition, but Arsenal's manager can feel positive that his team showed the fortitude to stay in the game until the final whistle, something that has not always been the case in this fixture.

On the flip side, it should also feel like a missed opportunity against a City team without two of their best players, Kevin De Bruyne and Aymeric Laporte. In their absence it was captain-for-the-day Sterling -- available again after skipping international duty with England because of injury -- who made the difference with a close range finish after Bernd Leno had saved from Phil Foden.

"It was an important victory," Guardiola said. "A clean sheet was important but not the most important thing. Against a team that has everything to be a contender to win the Premier League, we knew it would be a tight game, a difficult one but winning is important for the confidence and mentality and will help to grow us."

"With the position we have it is important to win games," Guardiola added. "We cannot be 90 minutes in the top level but we did it. We cannot be perfect right now but victories against teams like Arsenal help us to reduce this time to reach our best performance."

Pep Guardiola got the better of his former assistant Mikel Arteta. Getty

It was a seventh straight league victory for City over Arsenal, who gave seven minutes off the bench to £45 million deadline day signing Thomas Partey, but if the result was expected, the way Guardiola went about it was not.

When the teamsheet was handed in an hour before kickoff, it looked like a straightforward variation of 4-3-3, but turned out to be anything but.

Joao Cancelo, making his first league start of the campaign, was both a right-back and midfielder. Kyle Walker was a right-back and a centre-back. Bernardo Silva looked like an auxiliary holding midfielder while Sterling spent most of the evening playing through the middle alongside Sergio Aguero, back after missing the last four months with a knee injury.

It was the type of complicated system that Guardiola usually reserves for the latter stages of the Champions League, but this time it worked; City had more than 60 percent possession and 13 shots and probably should have won by a greater margin.

Ruben Dias, playing in just his second game following his summer move from Benfica, was excellent in the centre of defence, both in position and out of it. True, Ederson needed to make a fine save with his shoulder to deny Bukayo Sako -- Arsenal's best player -- but it was the Brazilian goalkeeper's only serious work of the night.

Guardiola's system was perhaps a nod to the way Arteta masterminded a win in July's FA Cup semifinal or, possibly, a way to protect Aguero, who looked rusty before he was replaced after 65 minutes and never threatened Leno.

The Argentinean striker might face an FA sanction after appearing to put his hand on assistant referee Sian Massey-Ellis after appealing a decision by the touchline, although Guardiola was keen to brush it off in his post-match news conference.

"Come on guys, Sergio is the nicest person I ever met in my life," he said. "Look for problems in other situations not in this one. We are incredibly happy he is back. Still he is away from his condition but he got 60 minutes and Wednesday we have another game. It is important to have him. We need his goals, his performance."

Guardiola also needs the healthy body after losing De Bruyne, Laporte, Benjamin Mendy and Gabriel Jesus just as the Champions League prepares to get under way; Porto are the visitors to Manchester on Wednesday.

"Mendy is out for three or four weeks, Laporte we expect sooner, maybe one week," Guardiola said. "[Jesus] is a big problem. The injury he had in the front of the leg, we will have to be calm and cautious. Still he is not in the field training."

Arteta, meanwhile, admitted to being frustrated with the result, but was keen to focus on the positives despite heading back to London with a sense of deja vu.

"You want to go to every ground and win but to get there you have to do so many good things in 96 minutes and at the end games are decided in the box," he said. "When you get there, you have to put them away. I have been in the dressing room for four years and to play with the attitude and belief we did is really difficult."