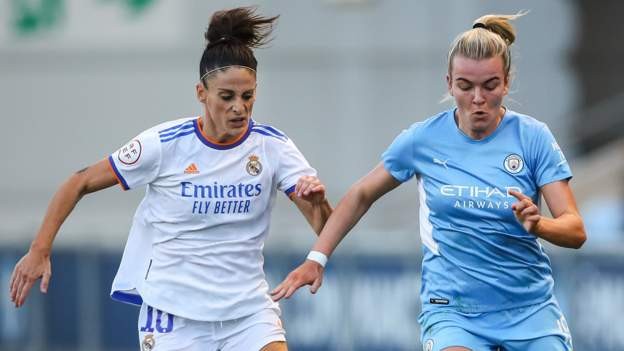 Manchester City could meet Real Madrid in their quest to qualify for the Champions League group stage.

Gareth Taylor's side, who finished third in the Women's Super League last season, enter the competition in round one of qualifying.

They will play Kazakhstan club Tomiris Turan in Group Four of the on 18 August.

If victorious, City will face either Madrid or Austrian club Sturm Graz to progress into the round two section.

The draw for the 2022-23 round one stage qualification took place in Nyon, Switzerland, on Friday.

Glasgow City enter the competition as runners up of the Scottish Women's Premier League.

If they can get past Roma in the semi-final of Group One, Paris or Servette will stand in Glasgow's way of reaching round two.

Last season's Champions League winners Lyon are automatically entered into the competition alongside the winners of England, France and Germany's top leagues.

Since Lyon are also the French champions, the winners of the league in Spain - the fourth-ranked association - are also entered into the group stage.

The other route to the tournament's group stage is the champions path where the champions of the remaining associations start their European campaigns.

Swansea and Rangers have both been drawn in Group Two of the champions path and will face each other if both sides win their matches against PAOK and Ferencvaros respectively.

All matches will take place at the same location, which has yet to be announced, with semi-final games scheduled for 18 August and the finals arranged for 21 August.